Story with the Glendale News Press (article on web limited time)
"Attorneys representing plaintiffs in a class-action lawsuit against Grand View Memorial Park have announced a $3.8-million settlement agreement. ...$500,000 would go toward the restoration of Grand View Memorial Park. Ayers will head up the restoration process, which includes obtaining original cemetery records, identifying and storing cremated remains in the mausoleum, installing an irrigation system, rehabilitating its landscaping and keeping track of all project accounts." - Glendale News Press

NOTE: It is reported the Superior Court Judge is likely to approve of the settlement.
Posted by Edna's Place at 12:43 PM 0 comments

October 21, 2009 is Edna's birthday! I originally planned to have a drawing, but due to a business trip for our company, I am combining this trip with a visit to some of Edna's old haunts to do some more reserach and seeing a film event in Niles for the first time. 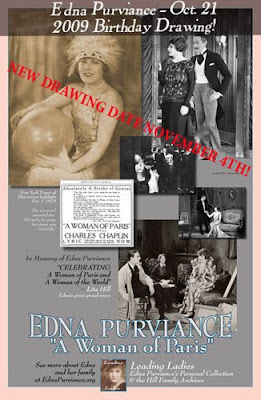 So, instead of a drawing today, please sign up for a chance to win one of Edna's 'A Woman of Paris' posters. Answer the three questions correctly and I will add your name to the growing list of entries. Drawing will be November 4th.

Celebrate Edna's birthday today, by seeing your favorite Edna film! Off and running, now! More when I get back...
Posted by Edna's Place at 7:10 PM 0 comments

Stephen Weissman 'Chaplin: A Life' in UK and Germany

Stephen Weissman
Chaplin: A Life
Available in United Kingdom and Germany
(Watch for editions in Russia, Estonia and Brazil) 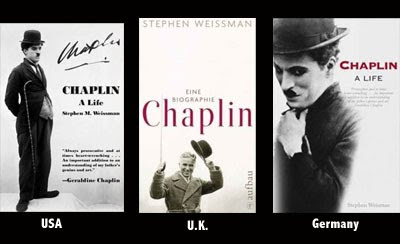 From the web, A tour of Star Museum

From the youtube collection a tour of the Star Museum in Abingdon, Virginia, with guide and owner Robert Weisfield.

October 15, 2009 - Grand View Cemetery will be open for another nine days, after this weekends opening on October 18th. Link to full story at Glendale News. Story online for a limited time. Link to Glendale City Hall.

Donna Hill's Stolen Moments is Back!

Stolen Moments is back with Donna Hill's latest podcast with author Matthew Kennedy about Joan Blondell: A Life Between the Takes. 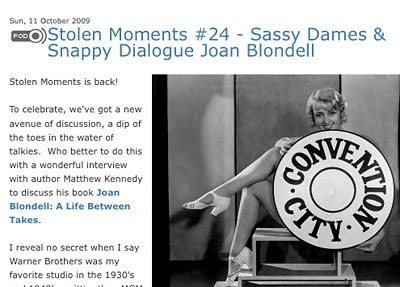 Thanks to everyone for signing the petition!

A thought to keep in mind...

You could walk up to that star and say, I helped get Edna's star on the Walk of Fame! And you would be part of the history, behind that star. Think about it... $25 isn't much, to be part of film history...
Posted by Edna's Place at 8:37 AM 0 comments

In what can be a very quiet time in the office suddenly turned into several things happening all at ONCE. And it all start Sunday, as our first snowfall of the year, brought down not only leaves, but the branches and limbs supporting them (about 17 limbs in our yard alone).

I never seen so many trees damaged in this town. It is something I have seen on television, but quite different to see, falling right in front of you, as a 20 foot limb, crack and falls right in front of us, causing a brief, whiteout. I moved both our cars, just minutes, before two limbs crashed onto the driveway.

As we worked on cleaning up, some exciting news came in about a possible Edna Purviance event next year in Niles, as part of their weekly, weekend events.

I have been asked to come down and visit one of their events and talk about maybe being part of their event. I've never been to any Niles events before, so looking forward to it.

On the same day, a work related project suddenly appeared, making that trip possible sooner, instead of later, which was very exciting to have happen. So, I will be heading down this month. Again, nothing set yet and only in the planning stages.

Because of this, I will have to move the Edna Purviance Birthday drawing to a later date, as I will be gone on the 21st. I will be moving the drawing to November 4th. That will give everyone two more weeks to enter.

Plus, the Walk of Fame folks at Facebook, finally reached over 1000 names on their Edna petition. The names will be checked and a few additional will have be gained, before the form is totally official. So if you like to show your support, please do so.

Something else happened, too. Something we have been trying for along time, but we will have to see how it develops. This came out of the blue, so we'll have to see where it leads too.

More to report, but leave it for now.
Posted by Edna's Place at 8:45 AM 0 comments

This morning, I posted on the Edna Walk of Fame page, that Edna was at 991. I just checked and she has gone over 1001 signatures for the Walk of Fame Drive! Arnold Parker was number 1000 and Emily Schenneider wrote,
"A kiss for Edna! The Great Woman!" 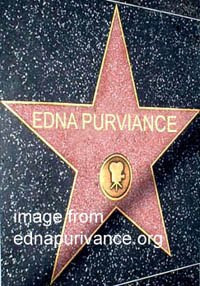 Please keep the signatures coming! We will be checking all and will need more to make sure we have the official 1000 needed.
Posted by Edna's Place at 1:43 PM 0 comments

Not exactly what I think of as silent film music, but a new twist by the P.A.M. Band (Partially Artificial Musicians) created by violinist, Kurt Coble. List of future performances with 'Metropolis' in the coming months.