Sorry for the lack of updates, but heavily writing Edna Purviance's biography. Keep coming by and checking, because I may pop up something. Post May 5th for sure. Lot of links to check out! Back to work here now... (Also, the Facebook Edna fan page, may have an update or two, a bit different than here.) Now really back to work...
Posted by Edna's Place at 4:57 PM 0 comments

JUNE 14, 2010 UPDATE
Update: June 26, 2010 - FLASH! The Book Depository is now shipping The Rainbow Orchid Volume 2! I received my notice today for my shipment and the site has removed it off the pre-order list!

Just over one WEEK! THE RELEASE OF RAINBOW ORCHID VOLUME 2!
Update June 25, 2010 - Great report about Garen's coming events and NEW items to come as the Rainbow Orchid is released July 5th! Watch the Rainbow Orchid Shop for the latest!

UPDATE MAY 24TH 2010: INTERVIEW WITH MINDLESS ONES - CARTOON COUNTY

GAREN'S RAINBOW ORCHID VOLUME TWO AVAILABLE IN JULY! VERY EXCITED HERE FOR GAREN, AS LOOKING FORWARD TO SEE THIS FOR A LONG WHILE!

For our many British fans, a quick note that Garen Ewing will be doing a talk about 'The Rainbow Orchid' in Brighton for Cartoon County (Cartoon and Comic Strip Artists Association). The program will start at 6PM, Monday, April 26th, 2010. 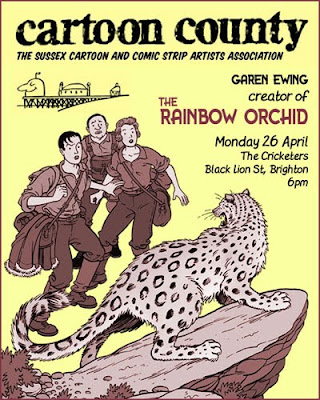 Update: Personally, I prefer the signed and sketched offerings directly from The Rainbow Orchid site, but if you are looking for just the best deal as an USA buyer, The Book Depository currently has the pre-order of The Rainbow Orchid, Volume 2, at 51% off, with free worldwide shipping.

Update April 23, 2010 - EXCITING NEWS! Garen Ewing, with Egmont UK, will be offering 50 advance copies of The Rainbow Orchid Volume 2 at the Bristol Comic Expo May 22-24, 2010. Garen will be sketching and signing his latest book at the event. If you are in the area, do go and get a copy! Garen will also be giving a talk about Orchid and publishing with Glenn Dakin. (Fans in England are so lucky!!! Enjoy!)

"I'm totally chuffed to be doing a talk alongside one of the UK's long-time comic-creating heroes, Glenn Dakin, who has a new novel out called Candle Man. The talk will take place at the Mercure Hotel, 2pm, on Saturday 22nd May. Tickets for the weekend are going fast - so book now"

Bologna's eight days and nights of cinephilic paradise from June 26 to July 3 will take place in four locations:

• The twin screens of the Cineteca's Lumière cinema, one dedicated to silent cinema (which will feature images of life from exactly 100 years ago) and the other to sound, showcasing, for example, little known films of Italy as it was during the period 1945-48;

• The Arlecchino cinema, a haven for films requiring the size of a larger screen;

• And of course Piazza Maggiore, which will host splendid restorations like Visconti’s Il Gattopardo, brought by the Film Foundation, or the new complete version of Lang’s Metropolis, for whom we can thank the Murnau Stiftung and Stiftung Deutsches Kinemathek, with the original score by Gottfried Huppertz, performed by the Orchestra of the Teatro Comunale di Bologna conducted by Frank Strobel.

What a wonderful surprise it will be to rediscover the films that started it all - the first actuality films, street views, masterpieces by the Lumière brothers bristling with their newly restored beauty thanks to the Institut Lumière in Lyon.

Year 1910 of our history of cinema, compiled year after year film by film, includes encounters with bright stars like Mistinguett and Stacia Napierkowska, with a debuting Francesca Bertini and Léonce Perret, and cinematic explorations of real and fictional worlds in the first feature length films.

In addition to this section, Mariann Lewinsky is also curating a retrospective – destined to grow over the years – about Albert Capellani, a director who contributed enormously to the development and worldwide success of Maison Pathé, one of the first auteurs and a crucial figure for the growth of the seventh art in connection with the other arts and the pursuit of photogénie.

The largest section is dedicated to John Ford. Just like the previous retrospectives on Josef von Sternberg and Frank Capra organized by Il Cinema Ritrovato, this section will feature all of Ford’s existing silent output (about twenty films from 1917), as well as some of his first sound films, including Pilgrimage (1933), a true masterpiece. 3 Bad Men (1926) will be shown in Piazza Maggiore with a new score by Timothy Brock to be performed by the Orchestra of the Teatro Comunale di Bologna.

Joseph McBride, the author of the brilliant biography Searching for John Ford, will curate a special dossier on the director, and several great historians, friends of Il Cinema Ritrovato, will make their contribution as well.

Another important name in American cinema and festival protagonist, Stanley Donen, will be our guest this year, more than sixty years after his debut with On the Town and more than fifty years after the golden age of musical ended - after which Donen continued his career beautifully with his personal brand of elegant comedy (Charade, 1963, and Two for the Road, 1967).

Anni difficili, “Difficult years”, is the title of a section dedicated to Italian cinema from 1945 to 1948: an intense, crucial (and yet largely unknown) period, full of incredible conflicts and uncertain victories – a time when two world systems were fighting over the soul and the economy of the country.

As for the film world surrounding Chaplin, this year the spotlight is on Robert Florey, an eclectic, talented Frenchman in Hollywood who was the assistant director of Monsieur Verdoux.

Though the larger part of his work was routine, Florey created films that were incredible for their experimental audacity and their "tender madness" much loved by Luis Buñuel: The Life and Death of 9413 - A Hollywood Extra (1928), a film version of Poe's Murders in the Rue Morgue (1932) and The Beast with Five Fingers (1946).

The festival would not be the same without restorations of films left to the ravages of time sponsored by the World Cinema Foundation. Among the most anticipated are two Fondation Pathé Archives restorations, Boudu sauvé des Eaux (Jean Renoir, 1932) and Justin de Marseille (Maurice Tourneur, 1934).

Just like at past editions, this year several “dossiers” will unearth rare or unseen materials relating to some of the greatest filmmakers: Fellini, Godard and Pasolini, letting viewers discover a whole world in the brief space of an hour…

The festival will be accompanied by a large exhibition about Fellini, Fellini. Dall’Italia alla luna, curated by Sam Stourdzé and promoted by the Cineteca and MAMbo-Museo d’Arte Moderna di Bologna.

The exhibition will be on display in the museum until July, 25. The exhibition is a larger version of last year’s show in Paris. Drawings, posters, period illustrated magazines, scene and set images all make for a seductive journey through popular images and the filmmaker’s creative workshop.

Il Cinema Ritrovato’s program takes place this year after the international conference Women and the Silent Screen, now in its sixth year. Sponsored by Women and Film History International and organized by the Dipartimento di Musica e Spettacolo-Università di Bologna in collaboration with Cineteca di Bologna, the conference will be held from Thursday, June, 24 to Saturday, June 26, and will feature about one hundred lectures (in English) on different issues about women and silent film (see wss2010.wfhi.org).

Our festival has always dedicated energy and time to presenting the feminine creative forces in silent film, with sections on divas and comedy actresses. This year we have started a new chapter about women in complicated stories of crime, revenge and espionage, introducing viewers to the powerful Astrea, charming Josette Andriot and beautiful Berta Nelson.

If you never been to this festival or Bologna, here is a taste from our visit a few years ago.
Posted by Edna's Place at 7:50 AM 0 comments 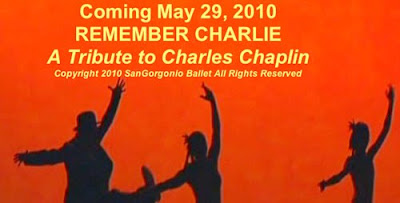 "Having the right look, physicality and perfect head of locks are all needed to be able to portray the famous English comic Charles “Charlie” Chaplin, and Banning resident Steve Ibanez has got all that plus a lot more.

Ibanez, 26, has been cast to star in the coveted role of Chaplin in an upcoming performance, called “Remember Charlie: a Tribute to Charles Chaplin,” by the San Gorgonio Ballet." - Traci Kratzer, Record Gazette
Posted by Edna's Place at 8:07 PM 0 comments

Films - Look-a-Like Contest - Penny Carnival Games
All part of the fun! See all of Edna's Niles films!
Never been there? Take a little just for fun tour...
(Credit: Chaplin cartoon by Larry Telles author of 'A Brief History of the Silent Screen') 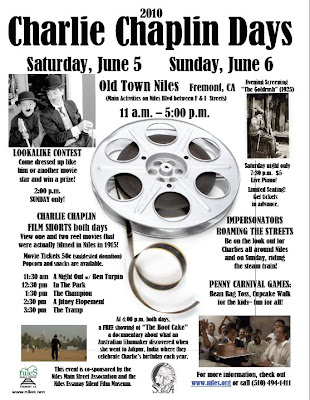 Edna has been misidentified over the years. This is just a fun test to test your skills in identifying Edna. All the images have been thought to be Edna, but are they? Take the test! Keep careful notes and on April 20th May 5, 2010, more will be revealed about each photo, on Edna Purviance home website.