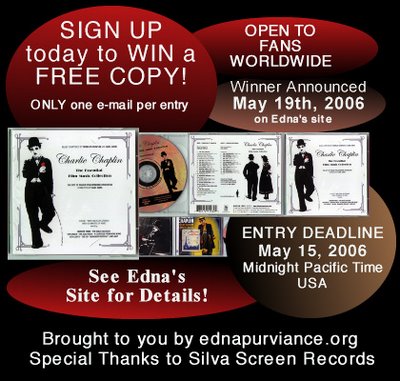 In this Google Video of the Day, Charlie Chaplin: "EDNA", Chaplin meets Steven Speilberg as Charlie searches for Edna through an array of Speilberg films. Created by Steven Hogg, this four minute animated film is worth the click over.

Personal Note: Being Edna's researcher, Charlie looks quite good, but the gal who plays Edna, well, a miss. Edna was blonde and this gal looks a bit more like Georgia Hale. Other than that, quite fun...
Posted by Edna's Place at 2:55 PM 0 comments

Chaplin Mutual Comedies 90th Anniversary Edition is available for pre-order at Amazon. This is the USA and Canada Edition. Release date June 6, 2006.
Posted by Edna's Place at 10:09 AM 1 comments

Charlie Chaplin Essential Film Music Collection is available at Amazon in the UK and in the USA. Also see this link for winning a copy...
Posted by Edna's Place at 9:38 AM 0 comments

The Unknown Chaplin DVD is scheduled for release in the UK May 8, 2006.
(Special thanks to Nancy, for passing the information on.) 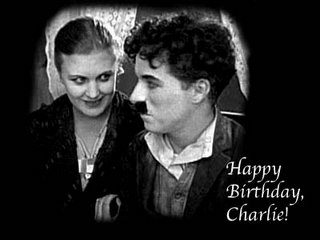 I created a little something for this new Brief Glimpse Number 8.
Posted by Edna's Place at 10:03 PM 0 comments

Here is an article about the Kono Conference in Japan March 2006.
Posted by Edna's Place at 2:40 PM 0 comments

After having a busy day with work and not feeling inspired to write this evening, I found myself looking at Edna's stats page and found an entry I forgot I created in 2004. It is a list of Chaplin's music from his films. I will have to see if it needs more updating, but thought I bring it out of hiding...
Posted by Edna's Place at 8:58 PM 0 comments

APRIL 12- Lately, I have been taking all my free time to work on Edna's biography, but I have added a few more books into the Latest Page of the Chaplin Library. Dominique has sent some new books to enter. One is from Thailand, but Dominique has questions about it. See the update for more. Daniel Kent Henry has a book called 'Charlie Chaplin'. It is an E-book and have been available on ebay, but upon checking recently, might be all gone at this time...

As for the drawing for The Chaplin CD it is still open until midnight Pacific Coast time, Monday, May 15th, 2006. (8AM UK time and 9AM European time on Tuesday morning.) I like to thank all the fans who have entered. Just some of the locations: CHINA, PAKISTAN, ENGLAND, IRELAND, SCOTLAND, CANADA, BELGIUM, GERMANY, SOUTH AFRICA, REPUBLIC OF CONGO, BRAZIL, SPAIN, AUSTRALIA, FRANCE AND FROM ALL OVER THE USA... (Hopefully, be might see one from Italy?) Good luck to everyone and thanks again for entering!

IL CINEMA RITROVATO is planned for July 1 - 8th, 2006 in Bologna, Italy. Chaplin films for the week long event include ten restored Keystones and 'A King in New York'. Check this link for more about 2006 EVENT. Also learn more about Bologna and the 2005 EVENT.
Posted by Edna's Place at 8:46 AM 0 comments