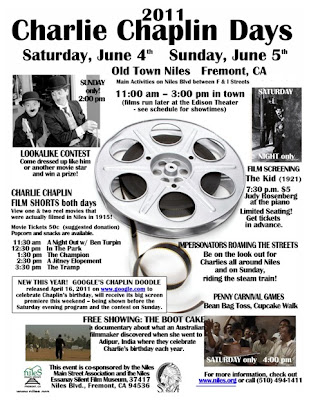 Here are a few of the upcoming annual events in the coming months...

Link to more annual events, festivals and schedules
Television viewers: Charlie Chaplin films on TCM in July & August
Check the TCM schedule for more of the latest silent films.
Posted by Edna's Place at 9:31 AM 0 comments 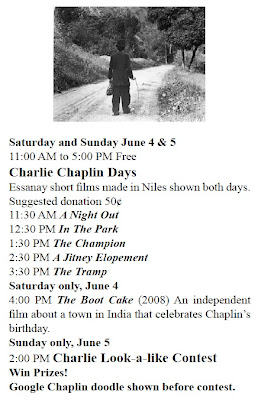 With 'The Artist' making news in Cannes, I read on the news that 'any good film student knows Charlie Chaplin's 'Modern Times' was the last silent film made. I got searching on that, and it certainly isn't the case. In fact, there have been other silent films made, including this one from 2005 called 'The Call of Cthulhu' (story from HP Lovecraft).

The film won several awards and appeared at many shows since it release, including being shown at 'Le Giornate del Cinema Muto' in Sacile, Italy in 2006. This is the trailer:

Another silent film released in 2007 is from Australia called 'Dr. Plonk' by Rolf de Heer. While not in wide release, it has made the festival current, from the 'much loved Australian director.' The following are the trailer and review/interview about the film.

Unlike these two films, 'The Artist' could be the most successful entry in the recent silent films made. Just have to get people captured into the once silent world, where music and emotions transported people into the story, and not just words. (Thanks to one of our Edna FB page followers for tracking down Dr. Plonk videos.)
Posted by Edna's Place at 7:10 AM 0 comments

The first trailer for 'The Artist' from France. A totally new French silent film.
UPDATE: SUNDAY, MAY 15, 2011 - Trailer and list of Reviews from Sunday:

(The trailer looks great! Wishing the best on Sunday's showing at Cannes. Update: And IT HAS!!! Can't wait to see this film!!!)

Reviews of 'The Artists' from Cannes

"Cannes has a bona fide crowd pleaser on its hands this morning as the silent film The Artist screened for the press to terrific response." - Entertainment Weekly

THE ARTIST "...earned sustained applause at its first press screening, a rarity for notoriously snooty Cannes critics." - ABC NEWS
"There was loud applause in Cannes on Sunday for "The Artist," a black-and-white, silent movie that recreated the magic of the "pre-talkie" era and brought relief from a relentlessly dark competition lineup." - Reuters Canada

"French feature will charm cinephiles with its affection for one of the movies’ golden ages." - Hollywood Reporter

"The Artist "....came out of nowhere on Sunday to become a strong contender for the Palme d'Or at Cannes. The Artist by Michel Hazanavicius won strong applause -- and more than a few laughs -- from festival goers who'd been wondering if Cannes this year was ever going to be about more than dysfunctional families and sexual deviancy." - AFP

"...this crowd-pleasing comedy tips its top hat to those late-'20s Hollywood conventions rendered obsolete by the rise of the talkie as a pompous star fails to adapt to the new era." - Variety

"There really aren’t adequate words to describe the way one feels after watching Michel Hazanavicius’ The Artist. Appropriately enough, words fail. When The King’s Speech’s ad campaign led with “some movies you feel” I wanted to cringe. But here I am faced with a film that really does deserve the slogan because you DO feel it. You feel it from the top of your head all the way down to the toes of your feet: pure joy, pure happiness." - Awards Daily

"“The Artist” is not just an exercise in old school filmmaking, it’s a beautifully told story that is classic and timeless in feel." - Indie Wire

"It’s ludicrous of course that Cannes competition should not contain superb cinematic works like The Artist, a joyful comic experiment that had the audience in the Salle Lumiere roaring with laughter and genuine delight." - Screen Daily

"On paper, Michel Hazanavicius‘s The Artist looks a fairly difficult sell. Tell anyone you’re off to see a black and white, silent movie that runs over 90 minutes long and they might look at you with a mix of pity and downright confusion, and it will probably take a Herculean effort by Warner Brothers and The Weinstein Company to convince audiences to come out to see it. But make no mistake, the film is as good as any cinematic experience gets, and will have a far more lasting effect on the world of film than any bloated 3D “epic” that screens out here." - Film School Rejects

"Michel Hazanavicius’ The Artist... seemed to win over a sizable portion of the audience — including me." "The Artist harbors shades of Singin’ in the Rain and A Star Is Born, but in the end it’s its own distinctive creature." "It begins as a novelty and ends as something more: A movie in which the present greets the past like a long-lost friend." - Movieline

"A silent backlash to high-tech movie madness brought loud applause Sunday in le grand théâtre Lumière. It happened at the Cannes Film Festival world premiere of The Artist, the first silent movie to compete for the Palme d’Or in the fest’s 64-year history." - The Star

"...The Artist evinces unlimited love for the look and ethos of the 1920s, as well for the style of the movies. The filmmakers clearly did their homework and took great pleasure in doing so..." - Los Angeles Times

"Cannes isn’t known for its lighthearted fare. But “The Artist” has to be one of the warmest, uplifting, brilliantly conceived movies to play here in the past decade." - Austin Movie Blog

"...black-and-white cinematography by Guillaume Schiffman that is absolutely stellar... The audience for this kind of fare is small if visible at all, but I am assuming they have confidence they can reach an older audience based on the massive success of The King's Speech." - Rope of Silicon

"Shot in black and white and hitting just the right tone throughout, The Artist is great fun. The two leads are completely unknown to me, but winning and dead-on when it comes to capturing the style of silent film acting... Hazanavicius has proven he's an artist." - Huffington Post

"Endlessly inventive, packed with clever sight-gags and rich in stunningly achieved detail, The Artist is a pastiche and a passionate love letter to the silent age; it takes the silent movie seriously as a specific form, rather than as obsolete technology, and sets out to create a new movie within the genre." - The Guardian UK

"When we saw The Artist at a press screening yesterday afternoon, the audience clapped for at least three minutes, and no one from the movie was there. Later that night, the gala premiere ended with a standing ovation that lasted, according to estimates, anywhere from twelve to twenty minutes. A friend of ours who was there says he left the balcony, went to the bathroom, went outside, talked to some people, walked back into the orchestra seating, and the clapping was still going on..." - NY Mag

"The Artist" manages the seemingly impossible: It's a new silent film that pays thoughtful tribute to the traditions of the past while creating great fun for modern audiences. Which is just what French director Michel Hazanavicius had in mind." - Kenneth Turan, Los Angeles Times Film Critic

See for yourself, later this year. Watch for late fall 2011 release!
(Looks like a great one to see in a picture palace.) 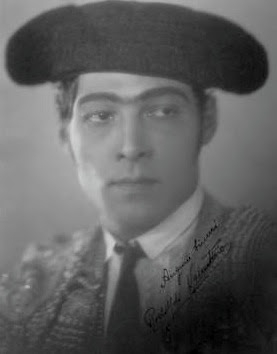 Screenings of Blood and Sand (TV abridged version and Rudolph Valentino and His 88 American Beauties.

Rudolph Valentino was one of the most alluring, enigmatic and simply irresistible movie icons of all time. He continues to inspire generation after generation of moviegoers. The Hollywood Heritage Museum honors the immortal Rudolph Valentino with an evening of rare photographs, film and artifacts on display in our lobby.

In Rudolph Valentino, The Silent Idol: His Life in Photographs, author Donna Hill retells the story of Valentino’s life using a treasure trove or rare photographs. Hill will present a slide show of rare images from the book, including photographs excluded due to space requirements. Most of the images employed have not been seen since the 1920s; many have never been released publicly until now. Augmenting the evening is an exhibit of rare artifacts from the collection of Valentino collector Tracy Terhune.

Rudolph Valentino was more than the “sheik” of one of his most famous films. He was more than the legendary star who died at a tragically young age. For long-time fans as well as curious newcomers, these remarkable images – candid snapshots at home, traveling, on film sets – reveal the glamour and charm of the man who continues to beguile and inspire movie lovers to this day.

Jackie Cooper has died at 88

Actor Jackie Cooper has died at the age of 88. Here is a few moments with him on 'What's My Line?'.