NOTE: This release has been pulled from sell due to copyright issues. See Edna's DVD section for more details or MORE HERE IN KEVIN BROWNLOW SECTION

The release date has changed on the Brownlow and Gill HOLLYWOOD SERIES: THE COMPLETE 13-PART DVD COLLECTION. The new release date on the UK Amazon site to DECEMBER 4, 2006. Check with Amazon UK for more details.

AUGUST 16TH UPDATE: DANIELE IS WORKING ON OUR NEXT TRANSLATED PAGE FOR EDNA'S SITE.

Recently, an Edna fan pointed out some changes on the Wikipedia page on Edna. They sent me the information they saw. One was a misquote from a book called 'Slings and Arrows' where author Robert Lewis speaks about the day Edna visited for the screen test in 'Monsieur Verdoux'. Here is a section from Lewis's book:

Lewis remembered Edna as "... extremely handsome woman, and she was faultlessly turned out from head to foot". Lewis continues "Removing her gloves, she picked up her test scene, and the two old friends (Charlie and Edna) started to read through their parts. She did very well, talking simply and intelligently and, in fact, she hardly needed to look at her script, having memorized the lines quite thoroughly". Next Chaplin moved Edna in a scene serving tea, while saying the lines.

Lewis clearly points out, "In the silent movies (Edna) had been used to illustrating points with movement". "Talking became an intrusion that was clearly upsetting her." Edna said to Chaplin, "What do you want me to do, Charlie, she pleaded at one point, act or talk?"

This quote from Lewis's book was re-written by the author on the Wikipedia site and is not worth repeating here. It made Edna sound much different than Lewis's original quote actually says. Maybe the Wikpedia author got it from another source and just repeated it. Whatever happen, the quote on Wikipedia is gone now, as another Edna fan has changed the piece, but it is how things get misquoted, and makes a person sound like someone they really aren't. So if you quote someone, find the original source and quote as written. It is better for everyone involved.

Future Stars from the past?

Article from an expert in the digital film industry in the US.
"Imagine a new film in 2010 starring John Wayne. Sounds crazy? Many people in the CG industry have talked about doing this. It is more likely, you will see Charlie Chaplin in CG first, but there will definitely be the ability to create this illusion for most audiences in the very near future."
Scott Davis
(CG - Computer Generated - see full article under Charlie Chaplin at google news.)
Posted by Edna's Place at 7:45 AM 0 comments

A new Chaplin fan at the Dugros?

If you noticed a bit of a slow down in The Chaplin Library updates, it is because CONGRATULATIONS are in order to Dominique and Emeline Dugros on the recent birth of their son! The very best from all of us at Edna's!

UPDATE: 12 'new' books added to the LATEST PAGE of the Chaplin Library, including 'The Essential Chaplin'.
Posted by Edna's Place at 12:42 PM 0 comments

Here is a link to NPR weekend report on the latest Chaplin book called 'The Essential Chaplin'. It is a collection of essays that have been edited by Richard Schickel. You can listen to the story that aired on Weekend Edition.
Posted by Edna's Place at 7:09 AM 4 comments 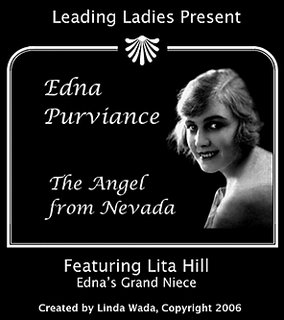 First video documentary on Edna Purviance with never before seen photos of Edna, Charlie Chaplin, Edna's lost film (The Sea Gull), Education of the Prince, new theory on how Chaplin found Edna and her later years as told by her grand niece, Lita Hill, who knew Edna for over 20 years.

('The Angel from Nevada' is 56 minutes that includes a special 10 minute silent section with music about Edna's life.) Day Passes are available. Check the Cinecon site for more details.

UPDATE JULY 18TH, 2006 - With Edna having many fans from around the world, I am please to announced the first Edna section to be translated into Portuguese. Edna fan, Daniele Rodrigues from Brazil, has just completed translating one of our Edna stories. It will be launched very soon for our Portuguese speaking fans.

Finally finished the video last evening for the Hollywood event at Cinecon Labor Day Weekend. Except for a few test viewings on different players and some touch ups here and there, it is finished. I will be placing up new video title information and a special announcement on Edna's site soon.

We have heard from Cinecon this morning and the exact time is being finalized at this time. It will be on the weekend, leaning toward Saturday, but will keep you posted.

(The video we originally showed in May to Cinecon is going to be the full interview version, while this new video is a somewhat edited down interview to fit in the new information and introduction on Edna. It is 56 minutes long. This new version was created with a more general audience in mind, who may know nothing on Edna. It includes items never released about Edna and a few things known by longtime fans.)
Posted by Edna's Place at 7:50 AM 2 comments

Yesterday, Edna's site had a record day for visits. I am not going to get into numbers, but it was four times higher than the last record day since the site has been online. While I get few emails from Edna's site, I can see in the stats that people are visiting from around the world. I like to thank all the people who visit the site, especially the ones that return again and again. Edna is not like a 'hot' gaming site, or anything like that, but it has been good to see the numbers grow over the years.

While this is not big news for popular sites, I am pleased and watching for the day Edna will reach over million pages read. At the current rate, it will be this year.

(And a bit of news in this: Lita lived with Edna during the time of the filming of Limelight and according to Lita, there were no trips to Chaplin Studio for Edna to play any bit role in that film. When you see the video, you will know why.)

I am planning a short special video peek on Edna's site from our interview recording we did in April 2005. As for the full video being prepared for Hollywood, I have it nearly complete.
Posted by Edna's Place at 9:41 AM 2 comments 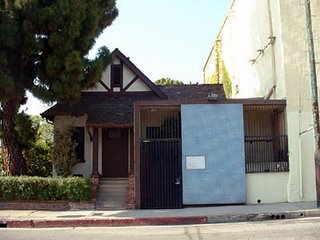 I posted earlier I was going to show the image of Chaplin's dressing room and studio. It was not like this when it was built, but changed when the street was widen. In the future I plan to place a special image of the studio on Edna's site.

A non-Edna or Chaplin message...

This could be the 'good old days' for the internet...

With a major US election coming up in less than two years, they would be very interested in silencing voices that can be heard now. If you believe in freedom of speech and enjoy the freedom the internet has given you, I recommend you support people that believe in the internet staying in the public domain and not be privatized.
Posted by Edna's Place at 3:27 PM 0 comments

I have been working feverishly on the video for the last month. I finally have the all the new section added.

This new section is about a ten minute silent piece with music and images, with story-line about Edna's life. (No talking.) The rest of the video is Lita's memories of Edna during her 20+ years of knowing her grand aunt. It will have images from the Hill Family Collection. A new title of the video is in the works, as well.

This new section was NOT easy to create and took many different forms before I finally came upon this present creation. I still have more titling and re-editing to do before finishing the video, but all of it should be done soon.

We are still awaiting the time and date of the event in Hollywood. I will post as soon as I know, but we were told in May the event would be held on Labor Day Weekend on (Saturday or Sunday).

I am working on a video short for Edna's site too. So while Edna's site is slow in updates at the moment, new updates are in the works.

Also, Lita has not been feeling as well lately and our thoughts are with her...
Posted by Edna's Place at 3:35 PM 0 comments

A Woman of Paris on TCM