Thanks to Unknown Cinema, here is a Pathéscope 9.5mm print version of EASY STREET with Edna Purviance, Eric Campbell and Charles Chaplin.

Napoléon is coming to LONDON in NOVEMBER 2013!

RARE EVENT! Tickets on sale soon
NOW! and it appears to be nearly sold out for Nov. 30th Check this link for seats still available
(At this update, no word on an added date)

This is the trailer from last year's presentation in Oakland, California.

Check this link at Silent London and watch for more information when available.
Posted by Edna's Place at 6:19 PM 0 comments

Get TCM USA? Here are some dates to mark on your TCM calendar for silent film and Chaplin  highlights:


TCM USA Viewers: Here are a few highlights to mark on your calendar:

March 1st
The Circus - with Merna Kennedy and Henry Bergman

GREAT - Did the Nazis ever see Charlie Chaplin's The Great Dictator? 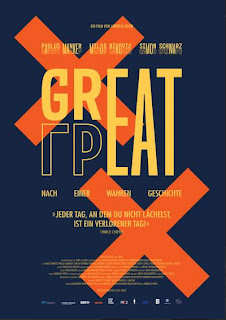 GREAT
Yugoslavia, 1942: based on a true and astonishing resistance story
about the Nazis and Charlie Chaplin's 'The Great Dictator' film
Dog Ear Films


"May 10th, 1942: a relatively minor event on the brink of world history, which, had it not really happened, would certainly be worth of being dreamt up. All of Yugoslavia is occupied by Nazi-Germany. Nikola, a young Serbian projectionist, has had more than enough.

Instead of emulating his violent Partisan friends, Nikola decides to teach the Germans a lesson all by himself. His weapon of choice: ,The Great Dictator‘ by Charlie Chaplin. His target: a cinema for German soldiers right in the heart of Serbia. What happens there, Nikola couldn't possibly have imagined in his wildest dreams.  GREAT, Facebook Fan page


GREAT (2013), the new film directed by Andreas Henn and from Dog Ear Films covers this story. It releases early this year. Here is the preview trailer. Hopefully, this will be available widely to see.

Update: According to the press kit, this is a short film (22 minutes). Hopefully, it will be available in some format for fans to see.

The documentary following the trail to Charlie Chaplin's possible gypsy roots. Here is a brief clip from the current production. More about the project here from NewArts Entertainment. LINK