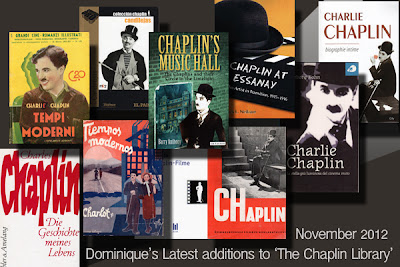 Link to November 2012 current latest list
(Current list of 15 books change, as new books are added)
Posted by Edna's Place at 3:12 AM 0 comments 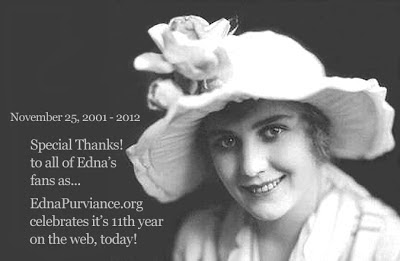 November 25th - EdnaPurviance.org 11th year on the web, heading toward it's 12th:

It was on Sunday, November 25, 2001, I emailed a link to Chaplin UK web creator, Garen Ewing. Garen had recently converted his original Chaplin UK site into the Chaplin Society official website. It was on The Chaplin  Society website where he placed that link I sent him. And at that moment, ednapurviance.org was officially launched on the web.

Garen was the very first person to see Edna's website before it was an .org site, after 9/11. His total enthusiasm, alone, sparked me from taking something that was on my hard drive, to making it into an official website. My husband found out, Edna Purviance .org domain name was available, and purchased it.  I'd continued working on the site, and with my husband's help, launched it on Sunday, November 25th, 2001.

I would have never done it without Garen's enthusiastic first response, as I still had doubters around, who didn't understand why I wanted to do this, or even research Edna. But Garen understood, as did Dominique Durgos. Dominique helped me create the French version of Edna's site, which was launched on November 25th, 2002.

Of course, none of this would be still going, if it wasn't for all the fans, from around the world, who continue to support Edna Purviance. Very grateful to each one of you, for being her fan. Edna's site started with over 50,000 pages read that first year to now, over 700,000 pages read per year (closing in on six million).

It's been a real pleasure to meet many of you, by the web, over the years, from all the countries Edna's fans live. I am just so very glad that Edna's first fan I knew and sent a link to in the fall of 2001, was such an enthusiastic one.


[Currently, working on Edna's family biography.]
Posted by Edna's Place at 6:00 AM 0 comments

Have a Charlie Chaplin Christmas for your special fan


Have a Charlie Chaplin fan on your list? Here is a list of the latest DVDs and Blu-Rays of Chaplin films, music and mixer of books about Charles Chaplin, old and new, to keep an eye out for, online and in bookshops. 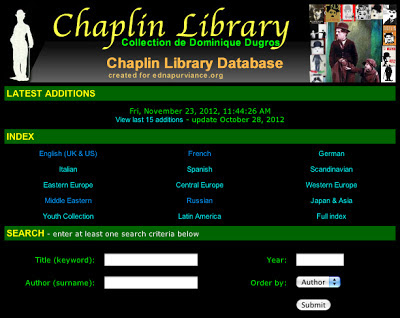 
Help silent film composer, Ben Model, reach his goal! Ben is raising money to create a DVD of his rare  silent films from his own collect. All the films have been scored by Ben and will be transferred in HD. If you like to see this happen, read here and follow the link to learn more.

I own more than a dozen short silent movies that are either lost films or just really really rare.  The copies I have are vintage 16mm film editions made in the 1930s and 1940s, and are still projectable and usable.

I want to produce a DVD, for classic film collectors, that will have these films on them in HD transfers and with new musical scores that I will create; I will also release the films on YouTube for all the world to enjoy.

I hope you'll make a pledge, and help me get these films out of cans and onto peoples' screens so they can been enjoyed and studied.  With your help, these films that have been unavailable to enjoy and own for decades will been seen again. - Ben Model