Here is an excellent chance to hear Charlie Chaplin from this 1952 interview in London, just before the premiere of LIMELIGHT. This was after he wasn't allowed back to the USA, but this interview is about his film work, not the problems surrounding him, at the moment. LINK 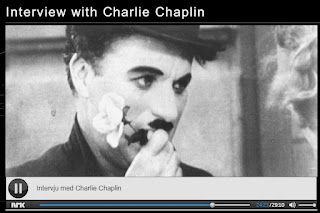 What Edna's fans have been up to!

A look around at my Edna followers...

Ben Model, well-known silent film composer, Rare Silent Comedy Film Shorts. Every two weeks on Wednesday, Ben will be releasing a very rare, if not, only known print, from his private silent film collection, to share with fans around the world. You will find these on his YouTube Channel. All films with new music, created by Ben. He also has a new podcast, which has replaced his written blog. It's available through iTunes!

Ayşe Behçet, has been writing a series of articles about her favorite star, Charlie Chaplin, for the Silent London blog. Being from South London, it has her own personal take about the little fellow. And joining into the ever increasing podcast world, Silent London, also has their own podcast program now.

Nigel Dreiner has created his own tribute to Charlie Chaplin, with is new commentary audio, on each of Chaplin's films, with his co-partner, Jose. The first two are on Youtube. Here is a look at Kid Auto Races:


Shana Dennis, another huge Chaplin fan, is helping with the latest screening of Chaplin films, and others, in Newcastle, Australia, June 30th. To kick things off, the town has opened a special modern look back at the silent era, with a special art exhibit at the ARThives. More details on the screening and gallery show here. 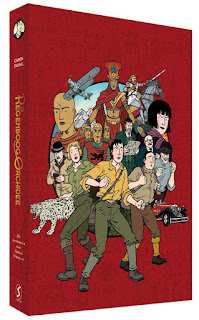 And Garen Ewing will have his The Complete Rainbow Orchid book available this coming September, in the USA and UK.

This wonderful, beautifully drawn adventure series features silent film star, Lily Lawrence, who happens to be a good friend of Edna Purviance (who makes a cameo appearance in Volume One). It's a longtime favorite here, and should be in every Edna collection! The best place to order is through Garen's Rainbow Orchid Shop, for personal signed and sketched editions, or follow his links to other online sellers. Check Garen's event list for personal appearances in the UK.

The Silent Era
Group Exhibition
A modern look back, at the silent film era. 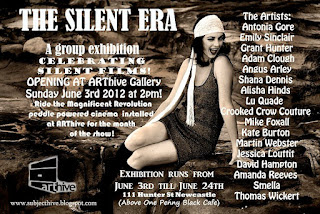 Part of the celebration, leading up to the showing of four silent films on June 30, 2012,  by the Sydney, Australia Silent Film Festival, in the city of Newcastle. Great chance for new fans to discover silent films through the artist work presented and see four actual films from the era. Learn more at Shana Dennis' Newcastle's Silent Film Fun Factory. Great job, Shana, and everyone!
Posted by Edna's Place at 9:46 AM 0 comments