If you love The Artist, and came out of the theatre, wanting to see more silent films, a good place to start, is to see some of the films the director of The Artist really enjoys.

Update: A few clips of the films mentioned. These online are not the best quality.

The Crowd - Directed by King Vidor

Congratulations to THE ARTIST and HUGO 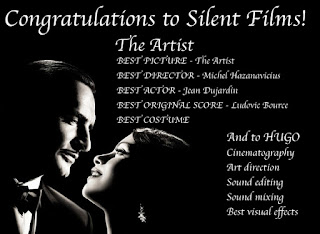 I'm just THRILLED to see THE ARTIST win best picture! I have seen it three times, already, and loved it more each time I saw it. I have been listening to the score since January and it has been great to write Edna Purviance's family biography to.
Here's the original trailer that excited me about the film last May. And now it would be a great time to see again! Watch for it in your area!

UPDATE: A wonderful open letter to Jean Dujardin from Melissa Fairbanks, the granddaughter to Douglas Fairbanks, Sr. - Jean Dujardin did thank Melissa, during this thank you speech, at the Oscars. LINK

April 1972, Charlie Chaplin returned to America for the first time in 20 years. It was an historical moment remembered by all who saw it. It was the first time I was introduced to Chaplin, and I have been a fan of his, ever since.

Here is a short video version of the actual moment. (Hopefully, someday, The Academy will share the full moment, without any cuts.)

If you missed the last on air broadcast of 'The Chaplin Archives' with Matthew Sweet, BBC 4 Radio is rebroadcasting the two part program. It's the program that covered the letter about Chaplin's birth that made news. Don't know how long these will be available, but if as usual, just one week starting today.

Here is a recent news segment with Jeffery Brown on PBS Newshour talking to Kevin Brownlow about this once in a lifetime screening in the USA. Carl Davis will be conducting the orchestra and Kevin Brownlow will be the guest host for this special four day event. If you can make it, it's highly recommended. For Tickets, contact SFSFF.

Charlie Chaplin Library Database has been updated with over 15 books
recently added to Dominique's Chaplin book collection. Click on the
image for the latest editions. 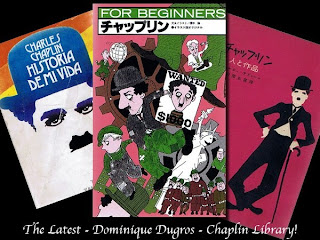