French comic book artist and film animator, Benjamin Rabier, created a 'tip of the hat' to Charlie Chaplin, in this 1920 silent animated film. Rabier is said to have inspired others, like George Remi (Hergé - the creator of Tintin) to get into the field as a comic book illustrator.

Here's a 9.5MM version of the Pathé film: 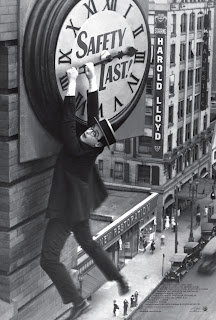 Harold Lloyd's Safety Last has been restored and will be release on Blu-ray and DVD this June. The collection will have David Gill and Kevin Brownlow's excellent documentary called The Third Genius.

To celebrate the new release, digital and 35MM copies of the film will be shown in theaters across the county starting in April. Check this list to see if at a theatre near you.

Here is the new trailer by Janus Films for the theater release. 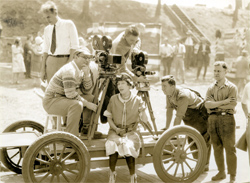 After von Sternberg, Capra, Ford, Hawks and Walsh, this year’s tribute will be dedicated to Allan Dwan. His career spans from 1911 – the days of Griffith and Ince – to 1961 – when the new waves set in – and produced 400 films (some claim 1400), covering every genre and technical novelty: from his early films (finally restored) to the more mature ones, a fine star vehicle for Douglas Fairbanks (Robin Hood, The Iron Mask) and Gloria Swanson alike (Manhandled). In the 30s and 40s Dwan is able to combine a spectacular with a more intimate cinema, to make one of the best anti-McCarthyist works ever made (Silver Lode) and even shoot a number of films in Cinemascope, a format which greatly inspired this ‘poet of the filmic space’. Finally, Most Dangerous Man Alive: an extraordinary end of career. 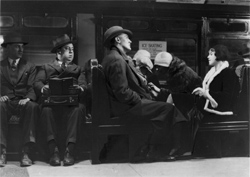 The restoration of Alfred Hitchcock's nine surviving silent films is definitely one of the most complex and important restoration project undertaken by the BFI National Archive to date. It is now an immense pleasure for us to be the first festival to screen them all, for the first time, in 35mm (despite being also available on DCP) the original format in which they were created by Hitchcock. The collection starts with the sensational The Pleasure Garden, a newly born film which was believed to be lost for many years, and ends with the evergreen Blackmail. Between the two The Lodger, The Ring, Easy Virtue, The Manxman and more, nine works which go well beyond the ‘crime scene’ to reveal Hitchcock’s remarkable inspiration and creative power which made him, while still in his 20s, the leading British director of his times.


Bigger than Life:
a journey through European CinemaScope 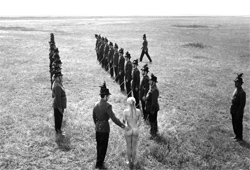 Over the last decade or so, the magnificent screen at the Arlecchino theatre has allowed us to celebrate the marvels of CinemaScope, particularly American CinemaScope at its best, before the format somewhat lost its inspiration and motives. We will now look at the magic of the ‘European Scope’ – so defined to take into account all of the variations the widescreen systems adopted in our continent. This section will include the best achivements from both Eastern and Western Europe, such as Marlen Khutsiyev’s works (July Rain, one of the greatest Russian films from the New Wave); Vasiliy Shukshin (perhaps his greatest, Happy Go Lucky); Miklós Jancsó (with The Round-Up a legendary study on the machinery of terror); Jean-Pierre Melville (with a too little known gem by Simenon, L'Ainé des Ferchaux), Mario Monicelli (La grande guerra) as well as Alexander MacKendrick’s journey through a child’s soul with Sammy Going South. 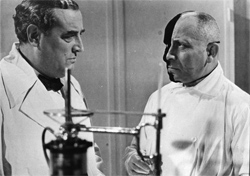 If, following our planet’s destruction, an alien was to visit a film archive and watch the films that were made in 1938-39, he would get a clear glimpse of the madness to come. Nonetheless, we have decided not to program the most obvious anticipations, but rather earlier films which captivate fear and frail hopes, random shadows, inconclusive dialogues, everything that the greatest films around that period, such as Renoir's La Règle du jeu, did so miraculously. Our round trip to these troubled times will include Menaces (Edmond T. Gréville), Paradis perdu (Abel Gance), White Illness (Hugo Haas), Sans lendemain (Max Ophuls), Engineer Kochin’s Error (Alexandr Macheret), Three Comrades (Frank Borzage), Pour la mérite (Karl Ritter). 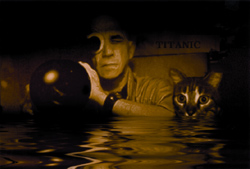 
Chris Marker was a unique soul. His essay film came to light after a gestation period which happened to be a very special one, the golden age of the French short film in the 1950s. André Bazin defined Lettre de Sibérie, the most legendary of Marker's early films: "I would say, an essay documented by film. The important word is 'essay', understood in the same sense that it has in literature – an essay at once historical and political, written by a poet as well”. Our tribute to Marker will focus on his early works, some of which have been very hard to see lately: Un Dimanche à Pekin, Description d'un combat (which has disappeared from the face of the earth for almost 50 years), La Jetée, Le Joli mai, La Sixième face du pentagone, together with ...A Valparaiso by Joris Ivens with a commentary &nd ash; nobody surpassed him in commentaries – by Chris Marker. 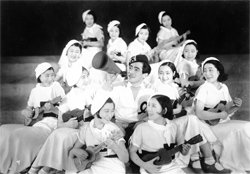 
By the mid-1930s, sound technology had become more widely disseminated in Japan as both studios and theatres invested in the new medium. By 1933, the Tokyo-based P.C.L. (Photo Chemical Laboratory) and the Kyoto-based Studio J.O. had begun production with the remit of producing sound films exclusively. But the transition was still a slow one, and it was not until 1936 that the majority of films produced in Japan were made with sound. The period thus marks an almost unique instance in which sound films were made alongside silents, and in which the aesthetic potential of new sound technologies were gradually assimilated and developed.

This second part of an ongoing retrospective of Japanese sound films from this transitional period focuses on three studios active in this key period. The work of P.C.L., with its stress on musicality, urban life and its at times trenchant so cial commentary, highlights the troubled modernity of 1930s Japan. Studio J.O., with which P.C.L. would ultimately merge into Toho, shared these concerns, but its base in Kyoto allowed it in addition to produce numerous jidai-geki (period films), most sadly lost. The jidai-geki was also the speciality of Nikkatsu, a studio that stretched back to 1912 but which now sought to fuse traditional narratives with the new sound technology, creating a distinctive style of realist period drama. Programme curated by Alexander Jacoby e Johan Nordström, in collaboration with Tokyo National Film Center.


Bologna Welcome – the official tourism website of Bologna – offers a useful, updated and easy information service to all Il Cinema Ritrovato participants or to all people in town for business or tourism purposes. Participants are advised to book their accommodation in advance in order to take advantage of the dedicated rates. Discover the Bologna Welcome offers here!