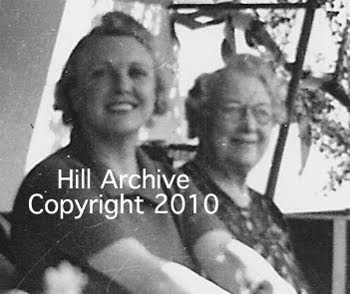 My favorite picture of Edna Purviance, rid of her Hollywood image, with the most important person in her life, her mother, Louise. The book I am working on, is about Edna Purviance, who happened to be a film star.
Working on the story about Edna Purviance, born in Paradise Valley, Nevada, who grew-up in Lovelock, Nevada, met Charlie Chaplin and became his Leading Lady in films, and the family who were a huge part of Edna's life, and their life from England to the western US. The story will included all the missing years, never known, about Edna Purviance.
Update June 22, 2010 -A few new posts up, while I sort out the new material I have gathered for the book. Again, I am not in a rush to produce a book (I don't make any money off any of this, but do it out of the interest of getting Edna's story as correctly documented as possible).

Edna has never been thoroughly researched and too much of the same material is 'recycled' book to book, all without knowing Edna's true background. That creates a problem, because if don't know Edna's real background, how do you know if the material you are using from a book is correct or not. That goes for anyone doing a project like this. Get original sources! And if you use other books (even well received ones), don't let that stop you from checking out their sources. I learned that lesson on this project, already. One thing for sure, I use to read biographies and autobiographies often before this project, but now I read any with a far more critical eye.

Meanwhile, check the new posts. Might be an event near you to start your first days of summer.


Update June 11, 2010 - Testing out this new page design. Needs adjusting, but see how it goes for a fresher look. (Due to a spammer a bit back, I have comments on pre-approve, but unless spam, your comment will be added. Thanks for understanding...)

Little update June 10, 2010 - While working on the draft, I came across some very interesting material which I am researching more on. So I have to pause, while waiting for more material to arrive. On another front, ran into a 'fun fact' connecting Edna with Stan Laurel (I will touch on it in the book). Meanwhile, some more mysteries appearing, that I don't know how they will come out just yet, but whatever happens on those, we will handle them, as they come along. I am just glad I put aside all of Edna's Hollywood years and worked on getting her personal and family background down. It really helps in finding Edna during the maze of the Hollywood years. This is a long process, but coming together. The Edna Facebook fan page has a bit more, time to time, including a fun bit called 'Edna Watching.' If you take you eyes off of Chaplin, it can be amazing what bits you can see. Thanks for following and stay tuned!

The Missing Edna Purviance clip from The Pilgrim?
Update June 1, 2010
Just a fun note as I have been re-reading the Chaplin books written since 1910s through today. Very interesting item to note. In the Robert Payne's book 'The Great Charlie' released in 1952, Payne mentions a scene in The Pilgrim of EDNA PURVIANCE smiling at CHARLIE CHAPLIN as Edna sits at the organ. (That is the same section where Chaplin does the David and Goliath scene.) Anyone ever remember a scene like that in The Pilgrim? Theodore Huff also mentions the same scene in his first book in the early 1950s.


Update: Just to be clear, I am not working on a book about just Chaplin and Purviance. Chaplin is just part of it, but not the whole story, or even the main story. Edna's life expands way beyond just those 12 Hollywood years. It is a story about a family who immigrated from England, and their journey in the newly settled American west and their journey in that early day frontier and lives that followed.

RECENT UPDATED COMMENTS ON THE SEA GULL:
Dear Linda,
Just a note to say how much I appreciated your book. Packed with fascinating information and wonderful images – obviously a labor of love which you have good reason to be proud of. - TL