The latest restored edition of the 12 'Chaplin's Mutual Comedies' are finally being released by Flicker Alley. This is the US version of the earlier French edition from Arte (La Naissance de Charlot). 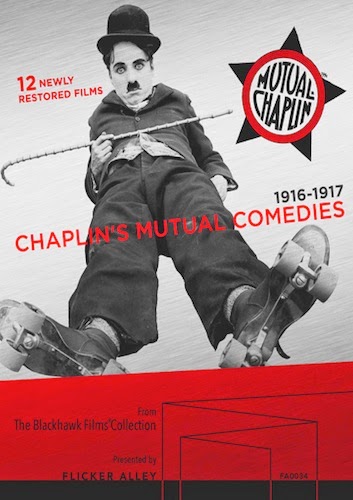 Released by Flicker Alley and Blackhawk Films, this collection is being released for a limited time in a collector's edition SteelBook Case at a pre-release price of $39.95 plus shipping. The case will contain both the DVD and Blu-Ray disc.

The special price is available until *July 29, 2014. (*Price likely will change before that date, if released earlier.) So, if interested, best to pre-order now. As most fans know these collections do get expensive. This one will list for $59.95, plus shipping, after release.

August Update: Review of Flicker Alley and the Arte Collection

Some videos bits from the Oscars!

Very sorry for being quiet over here, but I have been placing every free block of time into writing Edna's family bio. I have been doing new research as I go long, in trying to gather as much material from that era as possible. I'm well into the film years in the draft, but continue to find things that cause me to pause and rewrite sections. It's a great deal of fun, so thankfully, I don't think of it as work, but an adventure!

I haven't been surfing much on the web, but at times run into some nice things I like to share here. For those who haven't seen these, here are some videos provided by the Oscars sharing moments from the 2011, Summer of Silents series.

The first one is Kevin Brownlow speaking about 'The General.'


If you never have been to Cottage Grove, Oregon to see the town Buster Keaton filmed 'The General,' this is one video to see before going. John Bengston's continues his great work in finding the locations of where films were shot. This is a really good detailed look at 'The General' Cottage Grove locations.

If you do visit, stop in at the visitor center on Main Street, just west of the Hotel that Buster is painted on. They have a book about the filming, but be warned. When I was there, they were out of stock. (Interestingly, not everyone is as up on Buster in Cottage Grove, as we found out last year. So this video really helps in enjoying your visit.)


And a short bit about scoring for 'The Covered Wagon'. (I have the VHS of this film, and recommend the film. Hopefully, it will be on DVD one day. So far, not. It is one that should be done properly.)

PS - Thanks everyone, for the continued support of The Sea Gull, as more copies have been going out, especially to Europe and the UK. New stock in place, ready to ship!