The San Francisco Silent Film Festival announces today that it will present the U.S. premiere of Abel Gance’s legendary NAPOLEON in its complete restoration by Academy Award®-winning historian, documentarian and archivist Kevin Brownlow, in four special screenings at Oakland’s Paramount Theatre on March 24, 25, 31 and April 1, 2012.

The Brownlow restoration, produced with his partner Patrick Stanbury at Photoplay
Productions in association with the BFI, is the most complete version of Gance’s masterpiece
since its 1927 premiere at the Paris Opéra.

The SFSFF screenings also mark the U.S. premiere of the renowned orchestral score, written over 30 years ago (and twice expanded since), by Carl Davis, who will conduct the Oakland East Bay Symphony.

The spectacular presentation at the 3,000-seat, Art Deco Oakland Paramount will be climaxed by its finale in “Polyvision”—an enormous triptych, employing three specially installed synchronized projectors, that will dramatically expand the screen to triple its width. The logistics and expense of screening Napoleon properly with full orchestra and special equipment have made it nearly impossible to mount. Gance’s Napoleon hasn’t been screened theatrically in the U.S. with live orchestra for nearly 30 years and there are no plans to repeat the SFSFF event in any other American city.

Says Stacey Wisnia, Executive Director of the San Francisco Silent Film Festival, “This will be ‘the cinema event of a lifetime’ and for once that’s not just hype, considering that we may never have another chance to see Napoleon presented on this scale, and with Carl Davis’ magnificent score. But we’re also referring to the lifetime of passion that Kevin Brownlow has devoted to bringing Abel Gance’s original vision back to life.”

Mr. Brownlow, who last year became the first film historian ever honored with a special Academy Award, became fascinated with Gance’s film when, as a schoolboy in the 1950s, he ran two 9.5mm reels he had stumbled upon at a street market.

“I was stunned by the cinematic flair,” says Brownlow. “I was exhilarated by the rapid cutting and the swirling camera movement. What daring! I had never seen anything comparable—and I set out to find more of it.” That determination led to a lifelong quest.

The first major Brownlow/BFI restoration culminated in a screening at the Telluride Film Festival in 1979, with 89-year-old Gance watching from a nearby hotel window.

Under the auspices of Francis Ford Coppola and Robert A. Harris, a version of this restoration, accompanied by a score composed by Mr. Coppola’s father Carmine, was presented to great acclaim at Radio City Music Hall and other venues in the U.S. and around the world in the early 1980s. Mr. Brownlow and the BFI did additional restoration work in 1983. The current restoration, completed in 2000 but not previously seen outside Europe, reclaims more than 30 minutes of additional footage discovered since the 1979 screening and visually upgrades much of the film. This unique 35mm print, made at the laboratory of the BFI’s National Archive, uses traditional dye-bath techniques to recreate the color tints and tones that enhanced the film on its original release, giving a vividness to the image as never before experienced in this country.

Each screening of the 5 1/2-hour epic will begin in the afternoon and will be shown in four parts with three intermissions, including a dinner break. Tickets will be available online through the SFSFF website, www.silentfilm.org, beginning July 18.

Abel Gance’s NAPOLEON is being presented by the San Francisco Silent Film Festival, in association with American Zoetrope, The Film Preserve, Photoplay Productions, and the BFI. Technical services will be provided by Boston Light & Sound.

Founded in 1994, the San Francisco Silent Film Festival has showcased the finest films of the silent era as they were meant to be seen: on the big screen with live music composed and performed by accomplished artists. While its annual July festival remains its flagship event, the SFSFF now produces special events throughout the year.

Says Robert Byrne, SFSFF board president, “This extraordinary presentation of Gance’s masterpiece is a major cultural coup, not just for our festival, but for the whole Bay Area.”
Posted by Edna's Place at 11:11 AM 0 comments

Santa Clarita Historical Society - Charlie Chaplin film location lecture and slide presentation by author of 'Silent Traces' John Bengtson. Given at the 2011 Chaplin celebration in Santa Clarita. This detailed program is about 20 minutes.

Learn more about the Santa Clarita Valley Historical Society at this link.

July 10, 2011 - Tonight on '60 Minutes' the 1906 'A Trip Down Market Street' will be shown again. So if you missed last falls broadcast, good time to tune in again. Morley Safer will be talking with archivist Rick Prelinger and historian, David Kiehn (with the Niles Silent Film Museum). 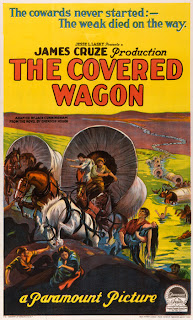 Will Ryan & the Cactus County Cowboys perform  their new score by Will Ryan, Benedikt Brydern and Dean Mora for the "Best Picture of 1923"   Paramount's "The Covered Wagon"


35mm print courtesy of the Paramount Pictures Collection at UCLA. This epic adventure of pioneers on a dangerous journey along the Oregon Trail is considered one of the first great Western films and features scenes filmed on location in Nevada and Utah.

With live musical accompaniment provided by Will Ryan and the Cactus County Cowboys.

Both introduced by film historian Kevin Brownlow
Follow these links to learn more and to secure tickets.

Happy 4th of July with the REAL John Philip Sousa!

"Stars and Stripes Forever" was composed by John Philip Sousa in 1897. While his music was recorded, he personally didn't conduct his own band for a sound recording until 1931. So here is John Philip Sousa not only conducting the Sousa band, but introducing his most famous music... Happy 4th!