I thought I place a few Chaplin film events coming up.

TCM - Check this Chaplin film listing
Posted by Edna's Place at 6:40 AM 0 comments 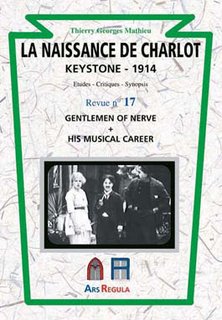 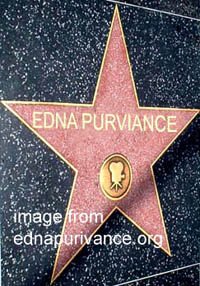 It was Edna's birthday Saturday, October 21th. It would be a nice time to send a little 'gift' to Edna by helping Edna get her star on the Walk of Fame.

We like to thank everyone who has signed so far, but if you have not, it would be a nice time to do it.

Watch this November for our special Hollywood and Cinecon Report about our visit and premiere of 'The Angel from Nevada', the first documentary on Edna Purviance. 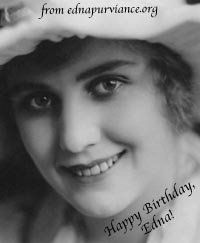 Thanks for visiting on Edna's Birthday! The special event is now over...

Visit next year on Edna's Birthday for another special one day event!

Other Links of interest:
BBC Chaplin Memorabilia | Documents
Includes images of Chaplin Toys and music sheets
Posted by Edna's Place at 11:14 AM 0 comments 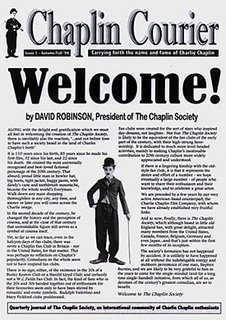 A pleasant memory from the past came in the form of an article about one of The Chaplin Society festival events in London.

The Society also had a wonderful magazine called The Chaplin Courier. (Photo is first copy in fall 1999.) I am sure if you were a member you kept your copies. I luckily got all the copies released before they ran out of issues. It was like a bit of Christmas when the latest issue arrived. I would spend the evening reading every word and always enjoyed doing the puzzles.

Stephen was planning another Society event in Hollywood, which I was planning to attend, but the event didn't materialize. The Society ended in the summer of 2002. I always thought Stephen did a great job, along with his family, and they greeted us (everyone) warmly at the London events.

Reading the article reminded me I was still placing together my little website about Edna Purviance in the fall of 2001. At the time, it was not ednapurviance.org and not even launched yet. Link to the original site. I sent a private link to an enthusiastic Chaplin fan and the response I received back energized me a great deal, and by November 2001 ednapurviance.org was born. And, well...

When I started last year, I had "Question of the Day". It changed to question of the week and slowly went away. Today I like to do another Question and maybe you have an answer to a question I have.

A few years ago, I was watching a classic 1930's movie with music and dancing. I can't remember the name of the movie, but I remember a song in it. In the film, it seems like the characters were not Broadway stars themselves, but were helping the producer create the show. During the end of the film the cast was putting on a 'Broadway' show, if I remember rightly. One of the ladies sang a song that included a reference to Charlie Chaplin during his Karno days. I clearly remember her mentioning 'A Night in a English Music Hall', when singing about Chaplin. I remember writing the name of the movie down, but lost the note.

I don't know if any of you ever seen this film. I have tried to find it again, but no luck. I can picture the singer in my mind, but not the name. So do you happen to recall a film like this and know the name?

As for the "Question of the Day": 'Can you remember other movies that had references to Charlie Chaplin in them?'

Since I can't remember the name of this film, with the Karno reference, I will start with one answer most of you should know: "An American in Paris". Gene Kelly does a Chaplin 'walk' in a dance routine for the song which I remember called 'Who could ask for Anything More', with the children saying, Charlie Chaplin, CHARLOT in the background. Comment or email your response...
Posted by Edna's Place at 10:49 AM 6 comments

Edna's Place has been on the web for one year now. When I started, I didn't know how this would go, but with a hearty thanks to all of you, we are starting our second year. I plan to be reporting more on Edna's first book 'The Sea Gull' in a few weeks and also have a Cinecon report in the works, so more on those later.

Since I started my first Edna's Place posting on picture palaces and organs, I will start this first 201 posting on a small piece about Chaplin's idea to start a music hall film in 1925.

After Chaplin finished a picture, he would have either no ideas or several ideas in mind for his next one. He had several ideas in the case after 'The Gold Rush'. One of his ideas was a story based on the London music hall life, a life he knew well.

Chaplin's Next Will be London Music Hall Film
"Charlie Chaplin next production will not be a screen version of a story called "Dandy". When Chaplin returned from New York he had other ideas in mind than making 'Dandy', so then got to work on two different stories. He finally decided to make one of London music hall life, with a blending of theme and ideas of 'Suicide Club' in it. Work on this picture will start about December 10th. Chaplin, of course, will direct and, as in all his pictures, Henry Bergman will be in the cast. Georgia Hale may also play the lead in her second picture for him." From Variety November 24, 1925...

He didn't do it this time, he made "The Circus" instead, and his leading lady was Merna Kennedy. But in the early 1950s, he would create his last US film 'Limelight' which was about the London music hall days of his youth.
Posted by Edna's Place at 5:34 AM 0 comments