Being a silent film fan, I am always amazed to run into areas I heard or read little about in the general silent film information. I know from my research Edna Purviance (and Charlie Chaplin, of course) were very popular in Japan, but I never gave much thought into how their films were presented in Japan during the silent film era.

With the current debates in some circles about how silent films should be presented, and with what kind of music, I knew, from the newspaper research, alone, there was a wide variety of ways, the films were presented during the era, from single instruments to full orchestras.

Back in the silent film era, watching a silent film in Japan had its own uniqueness too. Instead of an organ, the music would be from their traditional Japanese instruments. And, instead of just reading the titles, a live narrator gave voice to the action and characters on the screen. 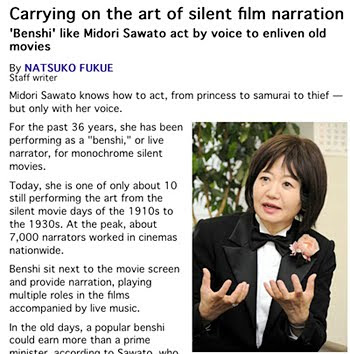 Called 'benshi,' Midori Sawato is one of the few live narrators working today. The Japan Times reports, during the silent film era, over 7,000 people were employed at this profession. And it was a profession, with popular performers getting very good pay. They also said, while narrators did exist in the US and France, this art was uniquely Japanese.

It would be great to hear more from Edna's Japanese fans on this. The art appears to be declining, with less than a dozen practicing performers. While it may not be every ones 'cup of tea' in watching a silent film, it was (and still is) part of the Japanese experience.

To learn more, here is the Japan Times article by Natsuko Fukue with narrator Midori Sawato, plus their video interview. Plus, to hear Midori Sawato-san in action, her narrative of the 1935 silent comic animation of Danemon's Monster Hunt.

My grandfather Tom D. Cochrane, who created both IMP (predecessor to Universal) and Universal with his partners, Carl Laemmle and Robert Cochrane was the head of Universal Japan and the man who brought all the silent films to Japan. he also opened all the theaters and entertained Charlie Chaplin, Douglas fairbanks and more in Japan at his invitation. The Benshi were a big part of his life and he was responsible for employing thousands of them. I loved seeing this video and hearing that the art has not completely died. It's a beautiful thing!