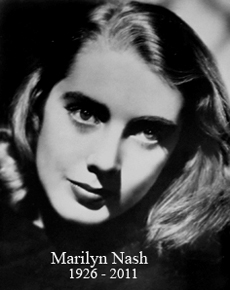 
UPDATE Oct 9, 2011: Here is a post from William Castle, who actually knew Marilyn Nash. He talks about Marilyn and her passing on October 6th, 2011. (Thanks to Garen for the correction on the date.) LINK
Posted by Edna's Place at 4:16 PM