Cinema Arts Centre
Huntington, New York
Cinema Arts Centre Release: In For Heaven’s Sake, legendary comedian Harold Lloyd is a spoiled, rich young man who falls in love with Hope, a poor missionary’s daughter. He rather reluctantly helps her out by populating the mission with local low-lifes who chase him through the streets into the mission, where they hide out from the cops. He is so successful in helping the mission and rehabilitating the local thugs that he plans to marry Hope. Harold’s wealthy chums, dismayed that he is marrying beneath his station, kidnap the poor fellow to prevent him from making a “mistake.”

The climactic chase on a double-decker bus driven by drunks is as hilarious and exciting a piece of celluloid as has ever been produced, but it is merely the capper to an uninterrupted stream of brilliant sight gags. For Heaven’s Sake is one of the cleverest and most consistently entertaining of all of Lloyd’s silent comedies. (USA, 1926, 61 minutes, 35mm print courtesy of Harold Lloyd Entertainment) 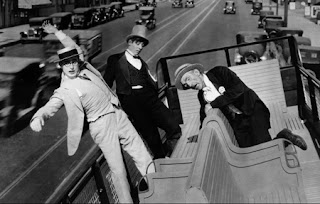 Ben Model is one of the USA’s leading silent film accompanists, and has been playing piano and organ for silents at the Museum of Modern Art in New York for the past 27 years, and for over five years at Cinema Arts Centre.  Ben co-curated MoMA’s “Cruel and Unusual Comedy” series and Roscoe “Fatty” Arbuckle retrospective, and also curated Shout! Factory’s new “Ernie Kovacs Collection” DVD box set.

A five-time recipient of the Meet The Composer grant, Ben is a regular accompanist at classic film festivals around the U.S.A. and in Norway, and performs at universities, museums, and historic theaters. Ben is the producer and co-founder of The Silent Clowns Film Series, now in its 14th season in NYC. Ben’s recorded scores can be heard on numerous DVD releases from Kino Video and others. Ben’s composed ensemble scores for films by Chaplin, Keaton and Lloyd are performed around the U.S. every year by orchestras and by concert bands.
Links for more details and tickets: LINK
Posted by Edna's Place at 9:54 AM

Hi Linda: this great theater is in my neck of the woods and I go there frequently. We are so blessed to have Ben Model appear on a regular basis. His film picks and scores are real treats!