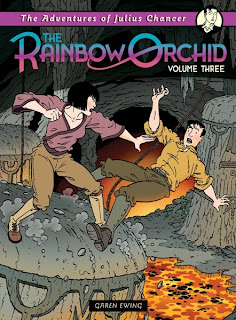 After the cliffhanging ending of Rainbow Orchid Volume 2, the exciting conclusion about the search for The Rainbow Orchid has been released April 2, 2012, in Volume 3!  Set in the golden era of the late 1920s, Rainbow Orchid is a beautifully illustrated and detailed story about the search for the mysterious flower that takes the reader from the streets of England to high mountain passes, deep into the unknown. It's an adventure that will keep you looking over your shoulder to who may be following you next.

Garen's engaging ensemble of characters, surround Julius Chancer, as he takes silent film star, Lily Lawrence and others, on a quest to find the mysterious orchid to help save Lily's father from total ruin from the evil Urkaz Grope. But we learn, Grope isn't the only one interested in this rare wonder. And with Grope's evil and determined assistant, Evelyn Crow, anything is bound to happen.

Since it's release, The Rainbow Orchid has been a favorite with young and old alike, with fans around the world. It has also been added to many library collections, as well. Garen Ewing's intense research adds depth and dimensions to his story, you don't find in every comic or graphic novel.


If you love big adventure, filled with travel, steeped in history and intrigue, you should check out The Rainbow Orchid today at Garen's official Rainbow Orchid site.  Volumes 1, 2 and 3 are available at many online shops under graphic novels and/or comics, some with free shipping worldwide. Special signed and sketched editions can be bought directly from Garen Ewing at The Rainbow Orchid.

Here is a ten minute video from the one hour plus auto interview.


UPDATE: If you like to get The Rainbow Orchid in the USA and not pay shipping fees, the best place to order is from Book Depository. They ship worldwide for free. Excellent deal. Currently under $10.

UPDATE - April 12, 2012 - Just received The Rainbow Orchid Volume 3 in the post this week! Beautiful publication. I can't give anything away, but it's a well paced, action filled adventure, beautifully illustrated, with some big surprises. Looking forward to getting my signed and sketched editions now! Excellent work, Garen!

UPDATE: June has been a GREAT month for The Rainbow Orchid, with a successful launch of The Rainbow Orchid Volume 3 and boxset at Stripdagen, and two excellent reviews in London The Observer, including one from comic actor and stage comic, Rhys Darby (best known as Murray Hewitt, in HBO's very funny, Flight of the Conchords.

Also, catch Garen's latest artwork for the weekly UK comic, The Phoenix. The four part series, The Bald Boy and the Dervish, with story by Ben Haggarty, appears in this week's issue #23.