Exciting news!
The Rainbow Orchid
by comic artist and writer, Garen Ewing,
will be published in Spanish AND French!
La Orquidea Arcoiris and L'Orchidée Arc-en-ciel 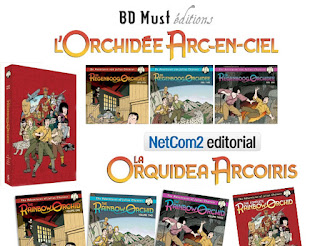 More details to come, but the scheduled release is Christmas/New Year Season 2012/2013! With a special French box set edition to be release from France. I can't tell you how excited I am about this! Huge congratulations to Garen! He has worked very hard for years for something grand like this, so very well deserved! (English and Dutch edition are available now!) MORE INFORMATION

And extra thrill, as an Edna fan, as Edna is mentioned in the series, and Lily Lawrence (leading lady character, along with Julius Chancer) is a silent film star. A tip of the hat to Charlie Chaplin, as well, as he is mentioned in this great adventure. If you don't have it, GET IT!

EXTRA
Dominique and I translates this to French a couple of years back... 10 minute version from our interview: