Another NOT EDNA PURVIANCE, as Jessica Buxton shared an image she found in the new book 'Charlie Chaplin' by Peter Ackroyd (released May 2014).

The photo marked (A) shows Charlie Chaplin, but NOT with Edna Purviance, as the caption reads in Ackroyd's book, but with Raquel Meller. And the year wasn't 1918, but 1926. In picture (B), Chaplin and Meller were photographed for the Los Angeles Times on the Circus set, at Chaplin's studio in the summer of 1926 (image B). 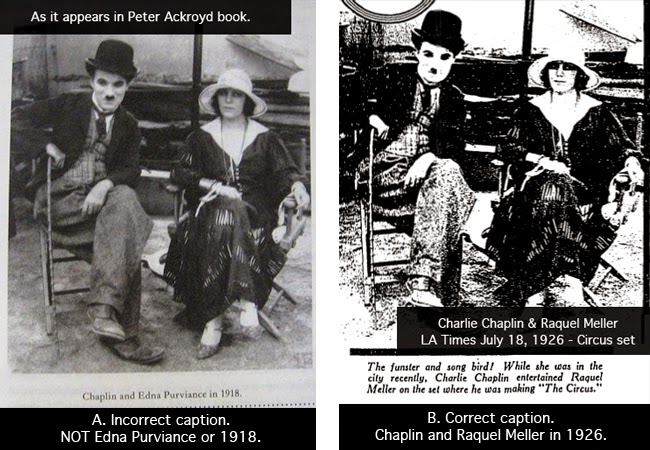 Chaplin had one of his instant attraction to Meller, and even wanted to cast her in his NAPOLEON film. While nothing came of that, Chaplin did use the song Meller helped make famous, "LA VIOLETERA," for his music for the blind girl theme in 'City Lights.'  Chaplin never credited the composer, leading people to think  "LA VIOLETERA" was his own creation. The composer, José Padilla Sánchez, sued Chaplin, and won his lawsuit against Chaplin for using his music uncredited.

As for the caption, it's another example of people not knowing what Edna Purviance looks like. It's easy to see it is NOT Edna, by face features and hair colour alone. What's more puzzling, is how the author came to the conclusion this was Edna.

Thanks, Jessica, for sharing this. Just want people to know, if you have this book, and you see this image, it is NOT Edna Purviance.

Another NOT Edna Purviance at Edna's Facebook page and Edna's org. Home site.

And here is an original recording of "LA VIOLETERA" as sung by Raquel Meller in the 1920s.
Original composer, José Padilla Sánchez.