BFI Southbank
London, England
Six months of films starting in August and ending early 2009, with the showing of the restored Keystone films. 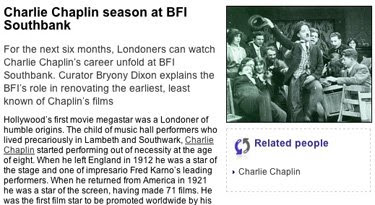 Showings come to an end in January.

Note: Jacko McInroy has seen the August 9, 2008 presentation and reports a nice collection of items on display from Chaplin toys to Chaplin's original cane and hat.
Posted by Edna's Place at 9:24 PM