The Sea Gull 'A Woman of the Sea' - at EdnaPurviance.com!

The Sea Gull "A Woman of the Sea"
by Linda Wada
available at ednapurviance.com
(Not available at any other online bookstore - New stock! Third edition!)
UPDATE June 28th: Thanks to everyone for the latest orders! Brand new stock on order today! 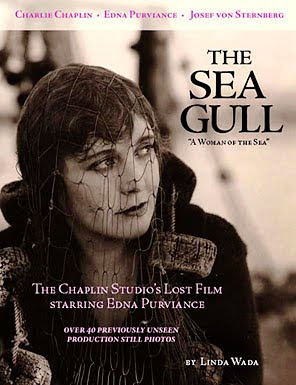 Comments about The Sea Gull
Kevin Brownlow - Silent Film Historian - London, England
"THE SEA GULL is an important contribution to film history, and worth buying for the stills alone. The look of the film, revealed in these marvellous photographs, makes it all the more tragic that it was destroyed.

Thomas Gladysz - Writer/Reviewer - San Francisco Examiner
"Had you not known it was self-published, any reader would assume this book the product of a major concern. It’s beautifully printed. The layout is attractive, and the text is informative. And what’s more, it’s the only book on an interesting and worthwhile subject... Obviously a labor of love, this fine book is an appealing look into the past." - Examiner, syndicated nationally, USA, full article


John Baxter - author - Paris, France
"Thanks for sending THE SEA GULL so promptly. It's a fascinating piece of research - particularly since von Sternberg has been almost a lifelong interest. My most sincere congratulations."


Lon Davis, author - Silent Lives: 100 Biographies of the Silent Film Era
"For years I have read about the lost Chaplin-Von Sternberg-Purviance film, A Woman of the Sea, but I never thought I would see more of it. Thanks to the work that Linda and Wesley Wada have done, I can now envision what it may have been.

Linda’s book, The Sea Gull, is an astonishing accomplishment. The sheer quality of the photographs, and the overall presentation, will give silent film aficionados a book they will cherish forever."


David W. Toll - Nevada Writer - Edna Purviance Fan
"It is beautiful, informative and edifying all at once.
All your hard work has resulted in a marvelous achievement.
It's a great work and beautifully presented."


Luke McKernan - Bioscope - London, England
"...really is a remarkable production, engagingly written and beautifully designed. It does more than give self-publishing a good name - it makes it something imperative for anyone with the knowledge, vision and ability to write. It's a real contribution to film history."


Phil Wickham - The Douglas Centre - University of Exeter, England
"We have now catalogued this and the book is available in our library for researchers to consult. Congratulations on the book, which is a very beautiful and fascinating record of the film and Edna Purviance’s career."

Kate Guyonvarch - Association Chaplin - Paris, France
"I congratulate you on a very interesting and attractive book...
I really hope it may lead to the discovery of other material about The Seagull."


Charles Lonberger - Beverly Hills Outlook - Beverly Hills, California
"This book, compiled by Linda Wada, is as close to a reconstruction of the legendary, lost film, A Woman of the Sea as we will ever get, and is a Godsend to the film historian... This book’s real value lies in the light it sheds on director Josef von Sternberg’s genesis as a cineaste. ...a must have for the connoisseur of cinema."


Ted Lu - Discover Chaplin - Montreal, Canada
"Let me first congratulate you on the fruition of your years of research and dedication to Chaplin's leading lady Edna Purviance.

I'm sure that Chaplin and Edna fans alike appreciate your efforts and commitments.

This ground breaking work has greatly enriched our understanding of Edna's life and works, and uncovered much of the mystery around "A Woman of the Sea," Chaplin's lost film.

Not for your dedication and perseverance, we might never even have a glimpse of the film.

I like the design of the book in particular. It looks very clean and classy. The stills from "The Sea Gull - A Woman of the Sea" with the reconstructed story line are no doubt the brightest spots of the book.

They not only help us better understand the film but also offer us an opportunity to appreciate the photography, the set, the decoration, the costume and of course the actors.

So "The Sea Gull - A Woman of the Sea" is not completely lost after all.

The book makes pleasant reading, with so many eye-catching still photos and a well-balanced story of Edna's private and professional life.

I hope you'll give us a fuller account of Edna's life and career before and after "The Sea Gull - A Woman of the Sea" in future editions."


Steve Weissman - author of 'Chaplin A Life'
"I thoroughly enjoyed reading it. I thought the text and photos were fascinating." -
Some Comments from Fans

"I am very pleased with it and have to say I am very impressed with the presentation and the overall look of the book. Yourself and Wes have done fantastic work on this project. Also thanks again for the signatures. I will so treasure this book for years to come." - DL, Europe, Third Revised Edition

"The book arrived - and it's lovely. I had it delivered to work where we know a little about publishing. My colleagues and I all agreed that you did a marvelous job, not only with the copy and design, but with choosing a printer." - Arlene Witt (New York)

"I think that you have every reason to be proud of it! The photo reproductions are extraordinary and the narrative is well-written and balanced. It's clear that you put in a lot of time and effort, and I'm grateful to you for it."I sincerely hope that The Sea Gull and eventually The Angel From Nevada will reach a wide audience for you and, of course, Edna. - W. Ayrovainen

Currently working on the biography of Edna Purviance and her family. From Edna's mother, Louisa, arrival to America from England to Edna's death in 1958. The life never known before and after her film career with Charles Chaplin, filled with the people most important to Edna and the town and families that helped led her to a career in films. If you thought Edna's life centered around only Charlie Chaplin, you don't know Edna Purviance... Watch this blog, EdnaPurviance.org or Edna Purviance Facebook Fan page as the project develops...

Just to answer your questions, we still don't know if any books will be available at the Chaplin Conference. But, always available here.