The Sea Gull at the Springfield Library

Following my The Rainbow Orchid post late last week, here is a little update on The Sea Gull "A Woman of the Sea" which is also at the Springfield Library. Here is Springfield's catalog librarian, Rita Eberle, with the current copy. Like The Rainbow Orchid books, it is available for interlibrary loan. 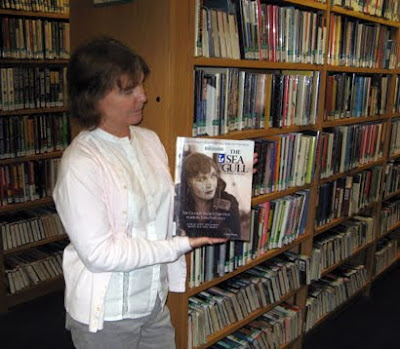 Rita Eberle with The Sea Gull book at the Springfield Public Library.

September has turned out as a good month for overseas sales for The Sea Gull, as the book continues to find new homes on bookshelves worldwide. Two books have gone to Australia, alone, in just one week.

Currently, if you live in the San Francisco bay area, and like to get a copy, the Niles Essanay Film Museum Gift Shop in Fremont, California has a stack of signed copies. (It is the only bookstore The Sea Gull is currently available. The books are available through the online shop at ednapurviance.com.)

Leading Ladies still have copies on hand, though the stock is getting low, as a new stock of books will be on order for the holiday season.

And just one more Sea Gull note, The Zaneville Museum of Art, in Ohio, is having a special Charlie Chaplin and American Culture exhibit from Oct. 4 through Dec. 4, 2010. It includes a special rare showing of reproduced images from Edna's personal photos from Leading Ladies. This includes a few images from The Sea Gull and from Edna's film 'Education de Prince' (1927) filmed in France.

This is a very rare showing, and could be the only one, so hope some of you may get a chance to see it. Again, many thanks for your continued support of The Sea Gull.

Note: This SG library copy of The Sea Gull (like The Rainbow Orchid and other library paperback books) have a special covering, that protects it from the heavy use of a library. It is quite clear and makes the cover a bit heavier.
Posted by Edna's Place at 8:48 AM