A Girl, a dog and an outfit for two 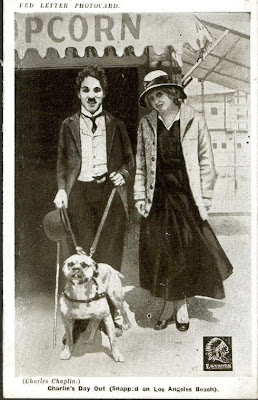 Recently, I saw this on an online auction: Red Letter Photocard showing this image from the Charlie Chaplin's Essanay period. The film was 'By the Sea' filmed in the Los Angeles area in 1915.

I have seen this card before. It doesn't say Edna Purviance on it, but I have seen sellers place Edna's name on it. But, it is not Edna. 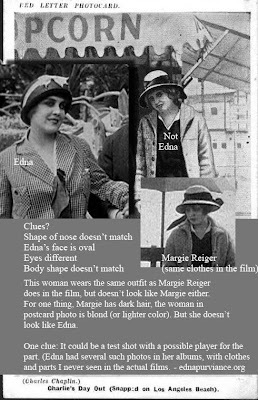 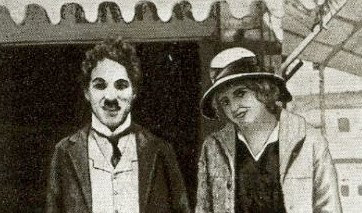 Just looking at it, the face features are all wrong for Edna's:
• Nose different shape
• Eyes different
• Head shape not oval, (Edna has an oval face)

Just to name a few...
Who it is, I am not quite sure. This woman in the postcard wears the same dress and hat actresses Margie Reiger wears in the film. Here is Margie in the film: 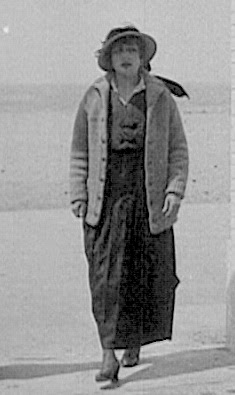 Margie Reiger, walking toward the camera in 'By the Sea'
I need a better image, but certainly don't look like button boots, like in the postcard.
But the lady in the postcard looks to have blond hair, and Margie's hair is dark. So, the photocard lady doesn't look like Margie or Edna.

I do know from Edna's photos, Chaplin took test photos to check different outfits and makeup. So this lady in the card could have been one of the ladies testing for the part. Also, Chaplin looked to be trying a dog for the film, but decided against it, since no dogs appear in 'By the Sea' except for two dogs, in the background on one of the beach scenes. 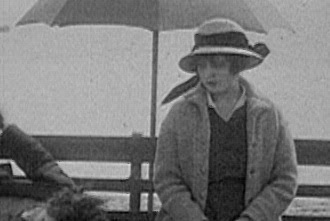 By the Sea goes to The Bank...
Another fun bit in researching this image, is to note the jacket Edna Purviance is wearing in 'By the Sea'. It is small line pattern jacket, with black buttons on the front and along the bottom. And also notice the blackish hat with the white bow. (Take out your copy of 'By the Sea' for a better look.) 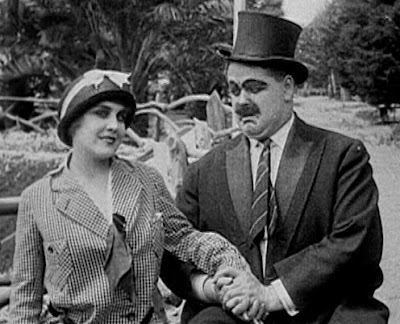 Edna with hat and jacket in 'By the Sea'
In the movie 'The Bank', which Edna would do a bit later, she is wearing the same hat with bow, and same jacket and skirt, but this time the jacket is unbuttoned. It also looks like a few black buttons were removed off the bottom of the jacket, just to change the look, a bit.

Edna with hat and jacket in 'The Bank'

The jacket and hat is only worn briefly, in the early scenes in 'The Bank' as Edna arrives at work. She takes the jacket and hat off, soon after arriving, and does not wear them in the rest of the film.

Pull out your copies of these films and check for yourself (same skirt, hat and slightly changed jacket) in two different films. As for the lady in the photocard? I don't know, but maybe someone else does, but it is not Edna.

Just some fun things I've noticed, while studying these films.
Posted by Edna's Place at 8:32 PM

I have this same BY THE SEA postcard (although mine is missing the Essany logo) as well as another one from the same film. In the second one, both Edna and Margie are both shown. Margie is definitely wearing the same outfit as in the first postcard. I think that the poor printing process (or maybe some retouching) makes her hair look lighter in the postcard with the dog.

Really like to see better pictures of Margie. Especially ones to see her smile and nose shape better. (Margie does look prettier, even when not smiling, compared to the gal in the photocard.) But the photocard has an odd look, and not the best.

I haven't seen a clear angle in the film that made me think that was Margie, since I am focus on the face, not clothes.

But really appreciate your thoughts, silentgirl. :-)

Leave it to Charlie to be thrifty with Edna's wardrobe! I love these interesting tidbits you find. Good work, Sherlock!

Actually, Edna has tax information showing she had to buy her own clothes for the films, and more.

I guess his reputation for being thrifty was well deserved!

Sorry, silentfilm, didn't see your link, earlier, and typed in your handle wrong (has been a long weekend of work).

Yes, Flickclick, he was thrifty and selective on what he spent money on. (Like all the film he used, he would yell at Rollie, if he clicked the camera, one click too many, after he ordered cut.)

I had some time to look through my books this evening, and found a lovely picture of Margie in the 'Bronco Billy' book by Kiehn (page 194). (Margie is very pretty.)

Looking at this photo and at the photocard, I just don't see them as the same person. But, now looking at a great picture of Margie (with the same head turn and smiling).

I think that's definitely Margie in the photo card - it's just so badly touched up that it's made her features unrecognisable.

Thank-you, Garen,
The retouching probably has distorted the face.