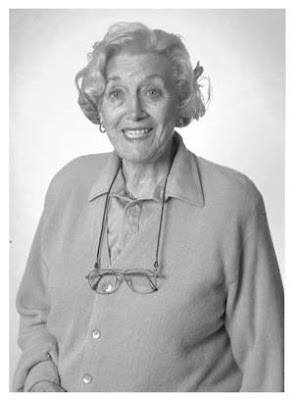 Whether you knew her as "Marian," "Mrs. Gibbons," "Mage" or "Majemahanna" (her mother's nickname for her) Marian was and is an unforgettable Hollywood person.

She was born in Cuyahoga Falls, Ohio, and lived in Wisconsin and Arizona. A brief stay in Hollywood in 1949 convinced her that this was the town she wanted to live in, but her husband Jim's business took them back to the Midwest. Marian vowed if she ever had the chance to come back, she would.

That chance came in the late 1970's and Marian came to Los Angeles and worked as a publicist with her daughter, Jane, an anchor for KNBC. The 1970's appearance of the town she had worked so hard to return to inspired her with Christy Johnson McAvoy, Frances Offenhauser McKeal, Mildred Heredeen and Susan Peterson St. Francis to start Hollywood Heritage, Inc. Through the inspiration and hard work of these founders, Hollywood Heritage became the success story it is today.

A memorial is planned and we will post that information as soon as it is available. She will be interred at Hollywood Forever in Hollywood.
Posted by Edna's Place at 2:38 PM