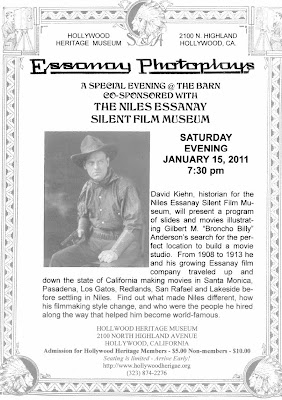 From Janet at the museum:

From 1908 to 1913 he and his growing Esaanay film company traveled the state of California making movies. Find out what made Niles different, Anderson's film making style and about the people he hired along the way to help make him world famous.

Wednesday, February 9, will be on parallel Language Films of the late 1920's and early 1930's when studios didn't dub or use subtitles, however, hired different actors to do the parts and speak in French, Spanish, Italian, German and more.