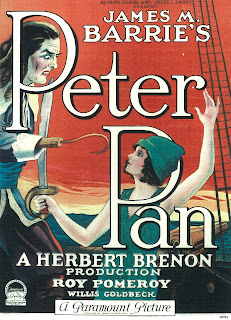 Betty Bronson stars as Peter Pan, the boy who never grew up, who charms Wendy and her brother to fly with him to Never Never Land. On this distant island of dreams and magic, they struggle to rescue the Lost Boys from Captian Hook (Ernest Torrence) and his band of pirates, encountering along the way the delightful fairy Tinkerbell (Virginia Browne Faire), a man-eating crocodile, and a band of valiant Indians (led by Anna May Wong). This memorable adaptation — which in turn inspired later film versions of the story — features a delightful cast, remarkable special effects by Roy Pomeroy, and fine photography by James Wong Howe (The Thin Man). (USA, 1924, 102 mins., 35mm print courtesy of Kino Lorber)

Ben Model is one of the USA’s leading silent film accompanists, and has been playing piano and organ for silents at the Museum of Modern Art in New York for the past 27 years. Ben co-curated MoMA’s “Cruel and Unusual Comedy”series and Roscoe “Fatty” Arbuckle retrospective, and also curated Shout!Factory’s new “Ernie Kovacs Collection” DVD box set.

A five-time recipient of the Meet The Composer grant, Ben is a regular accompanist at classic film festivals around the U.S.A. and in Norway, and performs at universities, museums, and historic theaters. Ben is the producer and co-founder of The Silent Clowns Film Series now in its 14th season in NYC. Ben’s recorded scores can be heard on numerous DVD releases from Kino Video and others. Ben’s composed ensemble scores for films by Chaplin, Keaton and Lloyd are performed around the U.S. every year by orchestras and by concert bands.