THE SEA GULL "A Woman of the Sea"
By Linda Wada
Charlie Chaplin's lost film production.
(PUBLISHED BY LEADING LADIES)
BOOKS IN STOCK!
Purchase now ONLY at ednapurviance.com.
Comments about the book

"THE SEA GULL is an important contribution to film history, and worth buying for the stills alone. The look of the film, revealed in these marvellous photographs, makes it all the more tragic that it was destroyed. 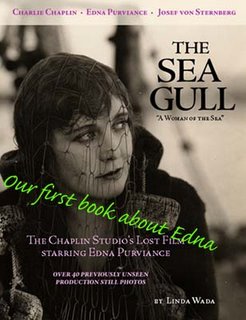 If you were at Cinecon or saw Edna's home page, you would have seen our announcement about our first Edna book called THE SEA GULL - 'A Woman of the Sea'. Edna Purviance starred in the film which was directed by Josef von Sternberg, but Chaplin never released it.

The SECOND book we are working on is Edna's biography. We do not have a name for that book yet, but we will have more on it in the coming months.

For Chaplin/Edna scholars, this is one of the most exciting developments in years, probably since the discovery of Sydney's color home movies of the "Great Dictator". I can imagine the excitement in discovering this cache of photos - like when historian Mack McCormick found the only two known photos of bluesman Robert Johnson in a family collection, thirty five years after his death. Amazing find!

It was very exciting to see these and to share with the family what film this was. (I knew the film the minute I saw the images.)

On top of that, these are Edna's personal images in her very own collection. And lucky the images have survived all these years.

Except for the few that 'escaped' Edna's home and now in the BFI collection (Lita, Ellie and I had long talks about how that happened, because the family never sold anything, these images give the most insight into that lost film to date.

And there are enough images to see a story line, which has been fun to place together, at least, the best one can, with everything that is there.

In his Chaplin biography, Robinson refers to a surviving title list from the film in the Chaplin archives - if that were available, it would help decipher the story.

Yes, there is some information, as Robinson said in his book.