The Sea Gull is RELEASED!!!! 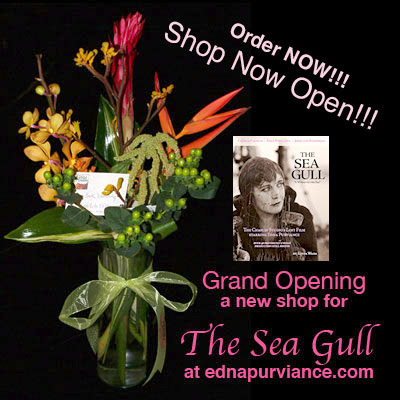 Shop is open with books in stock.

Fifty years ago today, we lost Edna to our world. And while Edna was forgotten by the masses, she was not forgotten by her fans. She remains a significant figure in silent film lore, and is fondly remembered by Chaplin fans.

Today, on this 50th anniversary of her passing, we have reason to celebrate! The event is the first book ever published about Edna, an effort we hope will help awaken Edna's memory among film fans worldwide.

Edna Purviance was one of Hollywood's most private film stars, and as a result, even during her film years, little was ever disclosed about her as a person. Today marks a new chapter in learning about the woman who was Chaplin's most endearing and enduring leading lady.

The Sea Gull - "A Woman of the Sea" – is the first-ever publication to feature Edna Purviance. This book is about her lost 1926 film, directed by Josef von Sternberg, who would later create "The Blue Angel" starring Marlene Dietrich. This would be the only film produced by Charlie Chaplin that did not feature Chaplin as director or actor. The film would never be seen by the public, and the story behind its creation and demise is fascinating. The book features over 50 recently discovered, and never-before-published production still photos from the film. 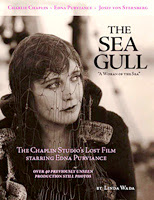 Noted director and film historian Kevin Brownlow has viewed the book, and he notes:

" the film revealed in these marvelous photographs, makes it all the more tragic that it was destroyed... This book provides the nearest experience we will have to seeing it."

So for about the price of an evening for four at the movies, you can order a seat for your own special viewing. Help us create a shining star for the leading lady you have enjoyed so much.

Link to the Home of The Sea Gull, ednapurviance.com

Reviews of The Sea Gull
The morning after, many thanks everyone...

Special Post today, from a longtime Edna fan...
I spotted a very nice post today, from a longtime Edna fan and supporter. If you visit Edna's site at all, you will see the name Garen Ewing. Garen is a very talented artist whose work I have been following for years. I have credited Garen for getting me on the web in the first place, when I sent him my very first Edna site link, long before it was ednapurviance.org.

Garen created and ran the popular Chaplin UK, as well as worked with the Chaplin Society. I use to visit his sites all the time, but never wrote in, being too shy to do so, but loved his work. I met Garen and Dominique (our Chaplin Library founder) in the spring of 2001. They have been great supporters ever since. So thank you Garen, for the very nice post in remembering Edna today. She would have been pleased...

Special Thanks to Bioscope
And another special thanks to Luke and the excellent team at Bioscope! Always a great read for everything silent. And watch them as they start their special Bioscope Festival of Lost Films. Thanks Luke!

UPDATE APRIL 12, 2008 - I have learned that Il Cinema Ritrovato in Bologna, Italy will be holding a major presentation about Josef von Sternberg at their festival, June 28-July 5, 2008. The information from Italy also mentions a presentation on The Sea Gull is planned. I don't know anymore about this event at this time.

UPDATE MAY 2009: After over a year, we are in the process of ending our First Edition of The Sea Gull. If you like First Edition books, do get your orders in soon, as supplies are getting low. Thanks to everyone (worldwide) for making the First Edition a greater success, than we hoped.
Posted by Edna's Place at 12:00 AM

Finally got the site and post up! And my computer and Internet held up this evening, as well.

Special thanks to everyone interested in the project! And all the support too.

Also a special thanks to Lita and Ellie for the very nice flowers today! You made the day more special!

This is very exciting!

Thank you so much, Garen. Finally got here!

Also, many thanks to all of you who ordered a book since our launch. I will be answering you back as soon as I can. Many, many, thanks, to everyone.

congratulations, linda. may the book be a great a success and the catalyst, perhaps, to bring edna purviance back into the spotlight in this thwenty first century.

One thing I have learned over the last seven years, Edna has some very loyal fans! (Well, Charlie does too.)

Thank you Charlie, for taking a chance with Edna in January 1915.