My tribute to photographer, Larry Salton

In the summer of 1980, I was a student at the Sun Valley Art Center in Sun Valley, Idaho. One of the workshops that summer was with photographers Mike Mandel and Larry Salton. The workshop was two weeks long, with the second week devoted to creating a billboard in Shoshone, Idaho. 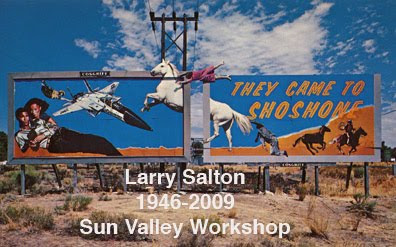 They Came to Shoshone was created from varies ideas involving the town of Shoshone. Three students, including myself, were photographed and placed on the billboard. It stayed there for many months, but this picture was taken the day we put it up. All the students helped in creating it.

Larry Salton has passed away Sunday from cancer at his home in Greenbrae, California. He was 63 years old. More at the LA Times.
Posted by Edna's Place at 12:21 PM

I just learned about this, so only had time to find my postcard photo. I still have a box full of the postcards. Going to see if I have the full picture of us, standing in front of the billboard.

Their workshop was the most fun of the summer. It was during the very last few years, a student could still live in that area.