On this night, on January 30, 1915, Charlie Chaplin and Edna Purviance lead the Grand March at the Celebrities Ball held at the Civic Auditorium in San Francisco. 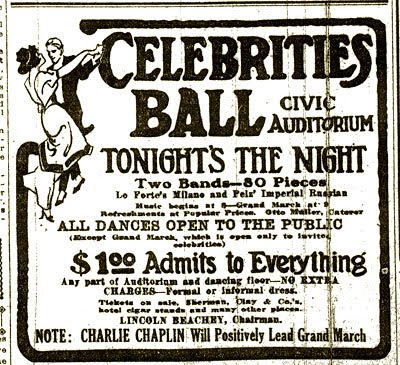 "Lincoln Beachey, who is to be in the grand march with Miss Ellie Shoemaker, has surrendered the leadership to Charles Chaplin. - Jan. 29, 1915, The Call

"Chaplin is to lead the grand march at the Celebrities' Ball... Chaplin was playing in a comedy with Miss Edna Purviance, who is his latest partner in the strenuous photoplay life and who has consented to be his partner in tonight's grand march." - Jan. 30, 1915, The Call

This was Edna's second visit in just three weeks to the Civic Center Auditorium in San Francisco.

During her first visit, of January 9, 1915, she was just one of tens of thousands, who attended, and watched the Grand March, at the Grand Opening event of the building.

Edna had no idea she would go from someone watching, to center of attention, in this same building, in just three weeks.

Now, she would take the lead role in the Grand March, with her new partner, Charlie Chaplin, at the Celebrities Ball.

What a thrill it had to be for Edna. But while it changed her life, it didn't change her.

It would be the beginning of a love affair, that would heat up in the coming months, but cooled to a warm friendship, that lasted a lifetime.