On this afternoon in San Francisco, on January 9, 1915, Edna Purviance was getting ready to attend the biggest event she ever attended. It was the grand opening of the Exhibition Auditorium at San Francisco Civic Center.

This event was a worldwide event, as over 20,000 people from all over the world came to attend on this one evening. It was the official re-opening of the Civic Center area, since the 1906 earthquake, which destroyed the original Civic Center. And Edna Purviance was one of guest to attend. 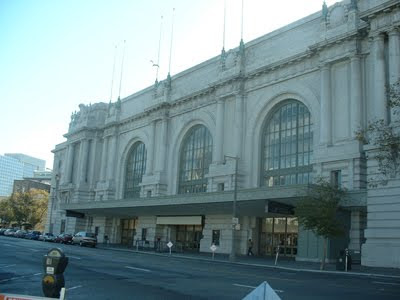 Exhibition Hall October 2009 - Photos by Linda Wada
At the time, Edna lived with her sister Myrtle Purviance Bell. They lived only a few blocks from the Civic Center. One can just picture Edna getting the final touches ready for the big evening.

During the event, Essanay Studios filmed the early arrivals to the event. By midnight, they returned with a special film to show the audience. Was Edna still there? She could have been, since midnight dances in Lovelock were a fairly common affair, with dances starting as late as 9PM.

This all happened before Edna Purviance ever met Charlie Chaplin.

Edna would go back to work the following Monday, not knowing her life would be changed forever in the coming two weeks.

And Charlie Chaplin? He was in Chicago on the night of January 9th, 1915. He was finishing up his first film and preparing to travel to California in the coming week. But he could have easily read about the opening, in the Chicago newspapers.


Exhibition Hall about the time of the opening
Could Edna be in this shot? Maybe... Inside the Hall on the night of Jan. 9th

Learn more at this link about Edna just before she met Chaplin.
Posted by Edna's Place at 2:32 PM

This was an interesting piece of Edna, Linda - I don't think it's ever been mentioned before. And the picture definately adds to it. This is why we need the Edna bio.!

You are right, it has not been mentioned anywhere before. I first found out about in Nevada and spend a few months trying to find this image they were super excited about. There is more interesting details too, that may point to how Edna was found so quickly. That picture, alone, certainly could have helped.

Now just wish the research on Jack could go faster, so I feel like I can get going on the whole book. Great new details on Jack, but so very hard to find more things when you don't live in the right area to do the serious research needed. (My local library options are dead now, with all the budget cuts.)