Rainbow Orchid Fans
Can't Wait to get a hold of the next edition of
The Rainbow Orchid Volume Two!
Garen Ewing's latest edition is part two of the three part series.
Volume two will be available
July 2010! 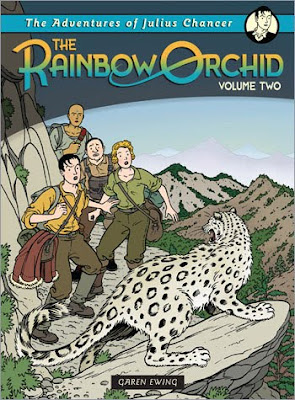 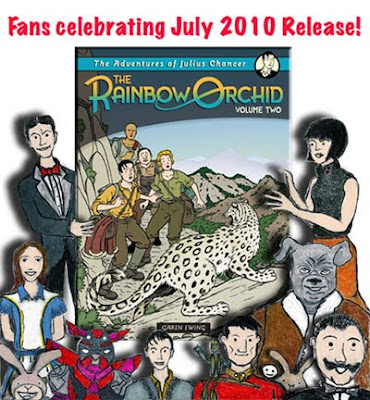 Check out Garen's Facebook Fan Page!
Stylish page for information and all the latest!
Also, to help celebrate the July 5th launch, I have updated my interview page I did with Garen last year. It is full of links to interviews, reviews and events surrounding The Rainbow Orchid!

Special thanks to all the visitors who have stopped by Garen's interview this last year. My husband, Wesley and I, are looking forward to the launch of Rainbow Orchid (vol. 2) and so pleased to see Garen's Rainbow Orchid series being published with Egmont.

NOTE: You can have a chance to win Volume One! Contest ends March, Monday 29th. Details here.

(Fan art drawing created by Linda Wada. The comic characters represent fans, followers and some Rainbow Orchid characters, all licensed with their creators, with all characters representing a connection to RO over the years. Special note: BAM - original home for 'Bulldog' by Jason Cobley - was the first publication the first episode of The Rainbow Orchid appeared in 2002.)
Posted by Edna's Place at 6:51 AM