Extra for my 'Edna Not' page on my Edna Purviance home site
(This time, not Morgan Hill...) 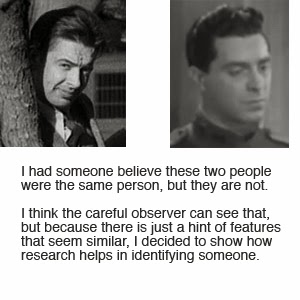 Recently, I had someone think that these two people were the same person. Two of their main facts, in coming to this conclusion, was the look of them and their name. Both had the name Morgan Hill. But in a case like this, just because someone has the same name and a similar look, isn't enough to go on in identifying people. I knew for sure, who the person on the left was, but didn't know anything about the person on the right.

The man on the left, is Sidney Morgan Hill, Edna Purviance's nephew. And through research, I have been able to identify the person on the RIGHT, as Maurice Earl Hill (alias Morgan Hill).

I knew Sidney Morgan Hill, as I have been researching his life for the past 10 years. I had this post here about a 3D project Morgan was involved with. This is where the confusion started.

Someone thought their Morgan Hill had to be Edna's nephew, based on a similar look to each other and the fact they had the same name. The other gentlemen, I never heard of, but in the last day, I learned more about him, to help prove, these are not the same people. Using the web sources, I tracked down who this other Morgan Hill really was.

I knew from the contact this other 'Morgan Hill' did an acting job in one known film called '23 1/2 Hours Leave.' Because he was credited in the film as Morgan Hill, he has his own listing on IMDb, but I learned that wasn't his given name. 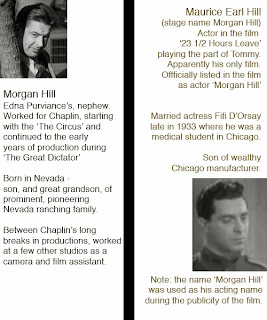 Lefthand Image: Sidney Morgan Hill was Edna Purviance's nephew. He worked for Chaplin's Studio between the production of 'The Circus' and early production on 'The Great Dictator.' He was born to a pioneering ranching and mining family in Humboldt County Nevada. (Some of his birth history is here.) Morgan worked for Chaplin throughout the 1930s, but also took on extra camera and film lab work, during Chaplin's long breaks from filmmaking. I never found Morgan acting in any films.


Righthand Image: Maurice Earl Hill was born to a wealthy Chicago manufacturer, but also read his father was a builder. While Maurice was studying medicine, he met stage actress and performer, Fifi D'Orsay (said to be born as Marie-Rose Angelina Yvonne Lussier, but not confirmed). Fifi was her stage name. They were married in 1933. 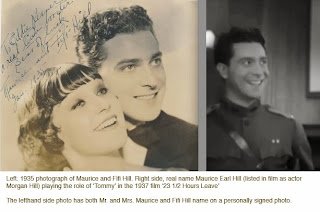 Lefthand Image: This is a signed picture of Maurice and Fifi from 1935. The image was signed by Maurice and Fifi Hill. You can see, even with the makeup, the details of the eyes, mouth, chin, and nose are similar. (The signed image was found during a web search.)

Righthand Image: This was the closest image I could find of Maurice Hill (stage name 'Morgan Hill') from the film '23 1/2 Hours Leave' from 1937. During this film, I found Maurice's name changed to 'Morgan Hill' for the credits in the film and also in the publicity in the press. This change may have been because of Maurice's wealthy Chicago background. But why Morgan Hill? Don't know, but one guess, Morgan Hill was also a name of a well-known town in California, so could have been as simple as that.

NOTE: Sidney Morgan Hill has been confused with the town of Morgan Hill, California. A couple of writers thought Sidney was from there. I did help one in getting their information correct, and they were grateful. As for Sidney Hill, he had great fun learning a town shared his same name. He even made a visit there, just to check it out. Initially, it was a train stop for Morgan Hill Ranch. 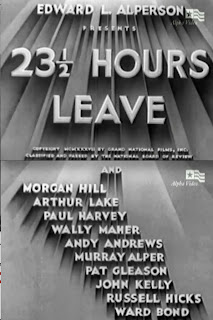 Here is how Maurice 'Morgan Hill' name is listed in the credits of the film. He plays the role of TOMMY. Maurice's first appearance in the film is when he brings in a message (at about 23 minutes into the film).

This is a more detailed account of the film, during its release with an ad for the film. 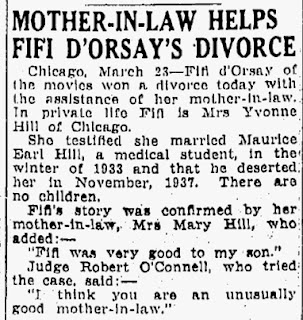 I decided to check out this couple further and learned they were divorced in 1939. Even Maurice Hill's mother helped Fifi with the divorce from her son, who is said to have deserted her in November 1937. (Not confirmed for the exact date.)

Sidney Morgan Hill was still at the Chaplin Studios, but coming to the end of his work there, as Chaplin was making major changes in staff, as part of Chaplin's move finally to sound and the changing labor union requirements for workers.

While Sidney Morgan Hill was never in the film, '23 1/2 Hours Leave' I will have much more about Morgan's real life in Edna's family bio. While I found more on Maurice Earl Hill, this post is just to help people look beyond just a similar looking face and name.

Note: There is someone else named Maurice Hill in the IMDb listings, but checking the age, he was a younger man than this Maurice 'Morgan' Hill and worked mainly in television.

Notes:
Nine Morgan Hills are listed in the IMDb listing.

Sidney Morgan Hill on the IMDb listing that needs updating, but clearly says from Nevada, which is correct.

Also remember, information on Maurice, can change too, as more research is done, but this establishes they are two different people. While this has nothing to do with my current Edna bio writing, I decided to post the research to help others to be careful. Going down the wrong path is easy. Thanks for reading...
Posted by Edna's Place at 10:49 AM