November 25, 2006 - Edna starts her sixth year on the web! Edna had a record year again, with October the best ever. We are pleased with the visitors and interest Edna is getting worldwide.

We never expected it when we started in November 2001, when Garen Ewing of than The Chaplin Society and Chaplin UK, was the very first to link us in the worldwide web! It has been a great adventure that we thank Mr. Ewing and all the fans who have helped and visited Edna ever since!

Edna is not a modern day star, so huge numbers are not what we expect, but we have been helping the Facebook group this year in helping them gather signatures to help Edna get a star on the Hollywood Walk of Fame.

This year brought more additions too with our project 'The Angel from Nevada' video (with Lita Hill) premiering in Hollywood and a new story about how Charlie Chaplin could have found Edna Purviance called Chance and Speculation.

We had a successful give away this last spring of the Charlie Chaplin Essential Film Music Collection with Carl Davis, so watch for another project along that line in the future.

Update: January 2008. The Sea Gull was released in January 2008. See ednapurviance.com or our latest Edna's Place entries for details.

We have a few new projects including the second section of Chance and Speculation coming in 2007 (see section one), more Chaplin Library additions from Dominique Dugros throughout 2007, and a surprise or two in store...

Much more on all of this as Edna enters her sixth year on the web! We like to thank all of Edna's visitors these past five years! 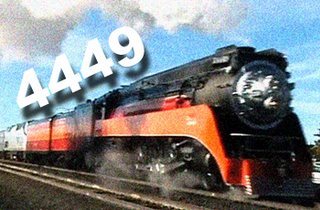 OH, I did say I planned a little something for today. Well, it is a little something, but this is no little train... But a special locomotive that ran for few years, just before trains were pass by for freeways.


Even in the early 1940s with cars and airline flights, Edna would travel at times by train to San Francisco from Los Angeles. One of the trains that traveled that route was called the 4449. This Southern Pacific Steam Locomotive traveled along the Coast Daylight Route between LA and San Francisco.

This year, I got to see the 4449 as it traveled on a special tour route in the Pacific Northwest. I only had a video camera and no tripod at the time, for it was a chance meeting of a great train from not so long ago.

I will place a special post for the 4449, but here is a peek at the video I took as it passed by one day. (The cars and 4449 Locomotive you see are all original and fully restored.)

March 2007 update: The caretakers of the 4449 are currently hoping to find a permanent home for the SP4449 engine. The current home, The Brooklyn Roundhouse, has an uncertain future, so a new home is being searched for in the Portland, Oregon area at this time.