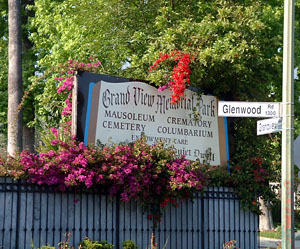 Note: I have placed updated links on bottom.

November 6, 2006 - Marsha Howard, who was one of the owners of the Grand View Memorial Cemetery and in the news this past year, was found dead on the Grand View Cemetery grounds this weekend. (There is a home on the grounds.) LA Coroner's says she apparently died of natural causes but no final conclusion at press time.

The Cemetery license was suspended last November by the state of California. It was found to have decades of miss management. Lawsuits have followed, that included closing of the Cemetery this year. It was reopened for limited visits only this last September.

Howard recently was trying to get her lawyers to place a gag order to keep the news of the trial out of the media. The judge had until December to make the decision. Also, the court ordered Howard to move all cemetery records to a document depository by November 15th.

Her death does leave the case with even more questions for the future of Grand View, since the suits were mainly against Howard.

She was 58 years old and in poor health, family report...

Update January 27, 2007: Grand View Viewing Hours 2007
From the Glendale News: " The city has released a revised visiting schedule for Grand View Memorial Park which cuts operating hours at the cemetery from each Sunday a month to two Sundays a month. The cemetery will be open from noon to 4 p.m. on Feb. 4 and 18, March 4 and 18, April 1 and 15, May 6 and 20 and June 3 and 17. The City Council will be re-evaluating the visitation schedule in March."

Grand View Tops the 2006 News Stories in Glendale:
"In life and death, Howard was one of Glendale's most closely watched figures in 2006, and the legacy of her actions at Grand View Memorial Park may live on for years to come." - Glendale News, Robert Hong
Update March 30, 2007 - Records to be reviewed by Attorneys

Update April 4, 2007 - Gravesite appears to have been sold twice.

Grand View Cemetery is where Edna Purviance is interred.
(special thanks to Amy for the update on this situation... - L)

I am court ordered to do community service with the City of Glendale Parks and Recreations. The other day we entered what appeared on the surface to be Grandview Cemetery. My first reaction was one of terror and crimanal neglect on the owner of the property. I have never witnessed such a horrific sight. Upon entering what remained of the Moselium I discovered a most ominous, dark and forboding reality. There were bodies stacked up behind a locked steel gate. I looked through to the carnage and spoke the words: "WHAT IN GOD'S NAME HAVE YOU DONE !!!"

It is horrible that businesses are allowed to run like this, and this place appeared to have a long history of problems.

It is equally bad the state allowed this to continue on for so long, since they are the ones who are suppose to control problems from happening.

A lesson should be learned out of this, so that other cemeteries, private or otherwise, are not doing the same type of business practice, as this one was allowed to run.