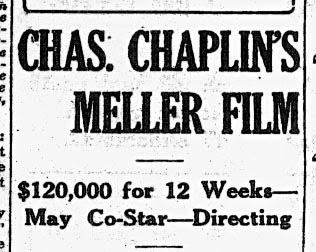 It was June 1926. Josef von Sternberg and staff were busy finishing the editing on The Sea Gull. Charlie Chaplin was nearby working on The Circus, when Spanish actress Raquel Meller paid a visit to the Chaplin set.

Chaplin was captured by the beautiful young star. So much so, Variety reported on June 23, 1926 Meller signed a contact on June 21th for $120,000. The deal was for 12-weeks to star in Chaplin's next picture for United Artist that he planned to direct, produce and possibly act.

He thought to use her as Josephine (a role he had in mind for Edna Purviance), but none of this happened. Chaplin's next picture after The Circus was City Lights. He never made his long planned picture Napoleon.

April 1926 picture of Meller on the cover of Time magazine.
Another Leading Lady Chaplin signed during this same period was Linda Nixon.
Posted by Edna's Place at 7:47 AM

It'd be interesting to find out what happened with Miss Meller's contract. It is doubtful that Chaplin would pay her 120K for nothing but he did show his fascination with the singer when he used "La Violetera," Meller's greatest hit, as a theme in "City Lights"