The famous motorcycle stunt rider, notorious for jumping autos and Caesar's Palace water fountains, decided to take on a canyon. It put Twin Falls, Idaho on the map, exposure that most locals didn't want.

Our little farm town of Twin Falls, Idaho, never was so crowded. A town of 15,000 exploded into a population of hundred thousand in one day (actually, exact figures were not known.) But what took normally 10 minutes to drive took 2 1/2 hours! Traffic was at a standstill right after the event. The airport was so full of small jets, they had to tow them into the fields to park them.

It was a September weekend, when the jump occurred. My father's boss decided to have a company picnic on land next to the Perrine Bridge, which had a clear view of the jump. All I can remember about the picnic was making a Jello salad with carrots. (Don't ask me why, just something we did in the 70s.)

ABC Wide World of Sports was on hand to record the event for later viewing on their weekly Saturday sports program (I believe Jim McKay did the honors as presenter).

The day of the event was sort of like preparing for a horse race. The pre-show lasted for hours, but the actual rocket flight event took only a few minutes. We were told to arrive before 11AM, so to be parked, before the heavier crowds poured in by noon. The event was 3PM, I believe.

Everyone was looking toward the launch, wondering if it would launch at the time scheduled. Suddenly, a white rocket shot up into the air, and a parachute soon appeared, causing the rocket to change course and drift down into the canyon.

As the rocket bike parachuted into the rocks near the banks of the Snake River, onlookers didn't know if he was alive or not, unless they were listening to the radio broadcast. But the parachute landed him safely (alive that is), and it became known as the failed attempt. 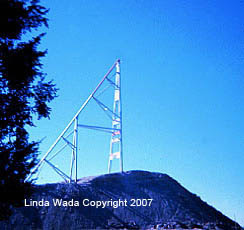 A few days later, after the event, we got to visit the jump site. The special jump pad was actually on the back of one of my relatives' farms. Because of this event, I met those family members for the first time.

Evel Knievel's launch brought all types of people to the area. They told us stories of the thousands of people camping out in the canyon for a full week, staking out their view for the jump. It was very close to Shoshone Falls, a falls higher than Niagara.

They let us walk into the property. It was littered with trash and even a burned-up car, still struck in the now dry mud. There was a huge party after the event that the police watched from a distance, and let play out. The only thing left from the jump was the launch pad used to shoot 'the rocket bike' into the sky.

This one event brought many international reporters and celebrities to town. One, William Conrad, even came back soon after the jump and filmed the TV series Cannon in a neighboring town called Kimberly, Idaho. (It was called Kimberly, Texas in the show.) I got to meet Mr. Conrad having lunch at the Holiday Inn.

But as fall turned into winter, that was the end of the event, except for the ABC's Wide World of Sports broadcast. Odd to see your town on national television.

Some locals enjoyed the Knievel event, but most didn't. They were just glad the show was over. As for Mr. Knievel, he continued to do more jumps and stunts in the coming years.

Evel Knievel died today at the age of 69, in Clearwater, Florida.

UPDATE - November 2008: Knievel would have probably loved seeing this, a daredevil crossed the Royal Gorge in Colorado with only a JetPack on this back. Here is a link to the UK Times Online about the crossing. Includes video of the crossing.
Posted by Edna's Place at 4:29 PM