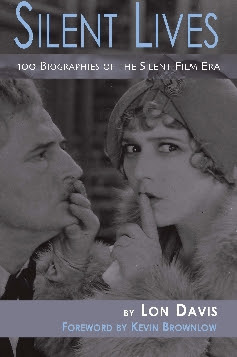 Published and available at BearManor Media
FREE Bonus DVD for everyone who buys directly
through the BearManor site called:
"Classic Moments"
containing two hours of rare footage with Lon Davis.


“If you ever wondered who created the movies, this fascinating book will provide the answer.” —Kevin Brownlow

“It is a truly delightful, interesting and informative volume—with a nice (and very mixed) choice of subjects.” —Anthony Slide

“This is a well-written, illustrated and comprehensive collection of biographies. It is also that rarest of shorthand guides, a genuinely reliable reference tool. A ‘must-have’ book for fans and serious researchers alike.” —Diana Serra Cary

Silent Lives took me a while to complete
almost forty years, in fact.
"I began taking mental notes for it when I first discovered silent films. That occurred in 1968 when I was nine years old. Despite the turmoil of world events, it was a simple time to be a kid in America. There were no personal computers, no home video theaters; there was no Internet.

There was television, thankfully, and on our black and white screens it was not uncommon to see silent movies, accompanied by cartoonish music and sound effects. For the hobbyists there were 8mm clips of Charlie Chaplin, Laurel and Hardy and Felix the Cat. Those grainy films were my portal to a much broader world, a world of slapstick and hilarity, of drama and Shakespearean tragedy. Once I entered it, I never wanted to leave." - Lon Davis

"The greats of the silent era may have passed away, but here they live! Within this book you will meet the famous (Harold Lloyd, Douglas Fairbanks, Lillian Gish) as well as the lesser known (Billy Bevan, Larry Semon, Eric Campbell). You will be privy to the secrets of the stars (Norma Shearer, Mary Pickford, Greta Garbo, Ramon Novarro), directors and studio heads (Cecil B. DeMille, D.W. Griffith, Lois Weber, Irving Thalberg), and those irreplaceable creative forces behind the scenes (H.M. "Beanie" Walker, Willis O'Brien, Billy Bitzer, Clyde Bruckman).

SILENT LIVES is illustrated with 200 rare photographs and original line-art advertisements and includes the free bonus DVD, "Classic Screen Moments," which contains two hours of outstanding clips, covering the entire silent era. (The DVD can only be obtained by ordering the book through BearManor Media)

One of the few surviving stars of the silent era, Diana Serra Cary (the former child star known as "Baby Peggy") describes SILENT LIVES as "a well-written, illustrated and comprehensive collection of biographies. It is also that rarest of shorthand guides, a genuinely reliable reference tool. This is a must-have book for fans and serious researchers alike." - Ben Ohmart

I am looking forward to seeing Silent Lives in 2008. Also, if you order the book through BearManor Media you will receive a special 2-hour DVD created for the book. Contract BearManor for details. There is also a limited edition hardbound version too.

Check the BearManor site for other books about the classic film era, including one called The Keystone Krowd, by Stuart Oderman. (About Keystone Films)

UPDATE: Silent Lives was released February 28, 2008. I have added it to our Silent Books list on Edna's site.

Also, check this link about the recent Oregon news story about the book.

UPDATE APRIL 7, 2008 - Article about Lon Davis Silent Lives from The Register-Guard (Eugene, Oregon) - more>
May 7, 2008 - I found this syndicated clip from April 9th of Lon Davis interview with Kelli Warner. Secrets of the silent movie stars>

Follow up: I have really enjoyed my copy of Silent Lives and highly recommend it for your film library collection. It is loaded with rare photos and bios of many of the top silent film stars, as well as some of the silent stars somewhat forgotten today. Great book for any library collection, as well. - LW

May 20th, 2008 - Monday I received the DVD 'Silent Lives: Classic Screen Moments' with Lon Davis. The DVD is free only if you order the book 'Silent Lives' by Lon Davis from his publisher Bear Manor Media. The DVD is about two hours long. You can watch normally like a silent film, or with running comments by Mr. Davis.

UPDATE FEBRUARY 18, 2009 - Lon Davis interview with Kelli Warner is available on YouTube. Check it out! 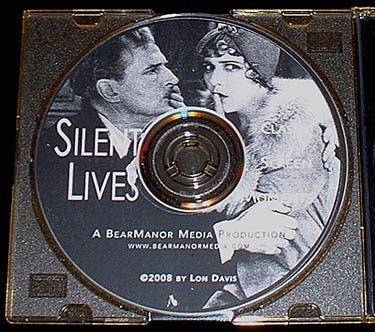 I actually watched it without comments the first time and enjoyed it! Later, I listened to selections with comments, and found it quite informative. Excellent for new fans to silent films. It has a mixture of films I have seen, but also very rare clips, I haven't.

The pair makes a great combination gift to introduce someone to silent films. So I would highly recommend buying the book and getting the free DVD from Bear Manor Media, and skipping any of the book discounters out there.

So, you don't get free shipping and couple of dollars off, but you get far more with this combination for only about $7 more. You would be hard pressed to find a DVD package out there with so many clips, at that price. LINK
Posted by Edna's Place at 8:28 AM