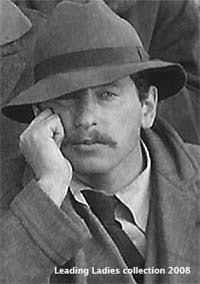 IL CINEMA RITROVATO
June 28th - July 5, 2008
Josef von Sternberg is the major feature for the 2008 festival. Here is a link to the full schedule of events. Charlie Chaplin films and presentations are also planned throughout the week.

A presentation on The Sea Gull is planned for July 4th, 2008. It will be presented by Janet Bergstrom and Cecilia Cenciarelli.

(note: I do not know any of the text presentation for The Sea Gull. I have been in contact with Cecilia (also with Janet). Cecilia will be using images from our book, The Sea Gull, by Linda Wada, for the talk. Link to a short video about the book. Photo of Josef von Sternberg from the Hill Family Collection, Leading Ladies.)
Posted by Edna's Place at 8:05 AM