Stooges Among Us by Lon and Debra Davis

When I was a kid, there was only one TV station and it didn't show any silent films. I saw my first silent films (The Keystone Cops) at the local fair.

Instead, there were three programs that filled the Saturday afternoon TV schedule: Warner Brother Cartoons (lead by Bugs Bunny), The Saturday Afternoon movie (usually with Shirley Temple films or a western), followed by The Three Stooges.

Personally, I have not seen The Three Stooges since that time. But if you were a fan of the Stooges, a new book about them is being released by BearManor Media. The book is called the Stooges Among Us, edited by Lon and Debra Davis. This is Mr. Davis's second book this year, following Silent Lives this spring.

The following is more about this soon to be released book: 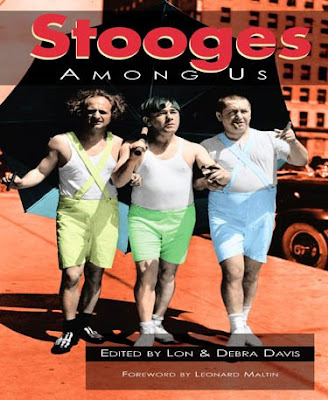 Behind the Scenes of the Stooges Among Us
By Lon Davis
"There was a time when books on the Three Stooges were hard to find. Hard to find? They didn’t exist. The slapstick offerings of Moe, Larry and Curly simply weren’t considered worthy of serious study. No self-respecting film historian would mention them in the same hallowed breath as Laurel and Hardy or the Marx Brothers.

That is, not until Leonard Maltin came along.

I was eleven when Mr. Maltin’s paperback book Movie Comedy Teams first hit the bookstores in 1970. There were the requisite chapters on Stan and Ollie and Groucho, Harpo and Chico, but there was also a chapter on Moe, Larry and Curly (and Shemp, Joe and Curly-Joe)—now that was groundbreaking! I read and reread the book until I knew by heart the dates of every milestone of the Stooges’ forty-five-year career. I also knew the cast lists of Woman Haters (1934) and Sappy Bullfighters (1959)—and every one of the 189 shorts in between.

In the nearly forty years since Movie Comedy Teams made its debut, there have been countless books written on the Three Stooges. So when my publisher, Ben Ohmart of BearManor Media, asked me if there was anything left to say about the team, I said no. It’s been done. Everything that could be said about the Stooges has been said.
Or has it?

There are those of us who actually knew Moe Howard, Larry Fine, Joe Besser and Joe DeRita—not just as live-action cartoon characters but as friends—and few of us have weighed in on the subject. One teenaged fan who had taken a three-thousand-mile bus trip from his home in New Jersey to visit the retired funnymen in Los Angeles was Scott Reboul. Now a scientist living in South Carolina, Scott has assembled a richly nostalgic program called “Searching Out the Stooges.”

Then there is Bob Bernet, a Dallas-based television producer who maintained a prolific correspondence with Moe between 1968 and 1975. Between Scott, Bob and me, I figured we might just have enough material for a book.

It seems that my adolescent experience of rubbing elbows (and bumping heads) with Stooges was not so unique after all. I began hearing about other like-minded Boomers who had crossed paths with “The Boys” back in the seventies. They included Cleveland-based businessman Rick Lertzman, comedy historian Randy Skretvedt, television writer Steve Stoliar, comic book writer Mark Evanier, radio talk show host Ed Busch and animation producer John Cawley. Each of these guys had wonderful—and previously unpublished—anecdotes to tell about their idols. For most of us, this was the first time we put our memories of meeting the Stooges on paper.

As the book began to take shape, I considered adding family members to the mix. One of my good friends is Eric Lamond, who happens to be Larry’s eldest grandson. Eric agreed to share his experience as a tech on the Stooges’ cartoon series. He also had a front row seat as Moe and Larry attempted to wallpaper a bathroom. (The results read like a script for one of their two-reelers—only this was real!) Through their web site, www.ShempCompany.com, I contacted Jill and Sandie Howard, Shemp’s grand-daughters. Sandie was kind enough to let me reprint a tribute she wrote about the man she affectionately refers to as “Papa Shemp.” I also reached out to Moe’s daughter, Joan Howard Maurer.

In my introductory e-mail I told her how much I appreciated her efforts on behalf of the Stooges’ legacy. “My respect for your work,” I wrote, “knows no bounds.” Joan responded instantly to this message. She said that not long before Moe passed away, he gave her a note which read (in part): “My love for you knows no bounds.” Joan took this as a sign to become involved in my project. Another family member is Gary Lassin. Gary tells how his marriage to Larry Fine’s grand-niece led to his becoming the president of the Three Stooges Fan Club and the curator of the world-famous Stoogeum.

Fred Wostbrock is a Hollywood agent who seems to know everybody in the business. Fred arranged to have three of my favorite television icons share their Stooge-related memories for the book: Adam West (the Batman star who appeared with Moe, Larry and Curly-Joe in their final feature film, The Outlaws Is Coming!), Rose Marie (who toured on the same bill with the Stooges in vaudeville), and Gary Owens (the famed announcer who knew most of the members of the team both professionally and personally).

Gary accomplished the seemingly impossible: He got the Three Stooges their own star on the Hollywood Walk of Fame. Rose Marie also had an interesting place in Stooge history—and hers had yet to be documented. Another survivor from that long-ago era is Diana Serra Cary, the former silent screen star known as “Baby Peggy.” Diana actually recalls seeing Ted Healy and His Stooges perform live in 1928.

Adding his own perspective is none other than Leonard Maltin, who took time out of his busy schedule to pen the foreword.

There aren’t a lot of experiences in life that are perfect, but working on the final stages of this book might be one of them. That was due in large measure to being able to co-edit the book with my wife, Debra. Debra didn’t start off as a Stooge fan, but she has come to appreciate their timeless comedy. As she said recently, the Stooges’ appeal is universal. You’re never too old—or too young—to laugh at their films. As if to prove her point, I’d like to close with a passage from an e-mail I received from Valerie Thompson, the gifted designer who is responsible for the layout of Stooges Among Us…

“When brushing up on the Stooges (for look and feel inspiration), I tried YouTube. My autistic four-year-old son Devon was extremely interested. Not wanting to encourage him with their eye-poking antics, I went right for the pie fights. I have NEVER seen my little guy laugh so hard in his life. The first time through he was practically purple from laughing and kept pointing and saying, “That’s so funny!” The only time he took his eyes off the screen was to make sure I was watching their every move, too.

The second time through the three-minute-thirty-second video he kept dragging the cursor to replay his favorite scenes. I tried other pie fights (like the one from The Great Race), but the Stooges’ clip was what he enjoyed the most. He shared it with his friend a week ago, who has now announced to his mom that he wants a pie-throwing themed birthday party.”

I just hope he invites me."

The Stooges Among Us is available through this link at BearManor Media.

UPDATE JUNE 30th : I have just received a copy of Stooges Among Us. It contains a collection of stories about the all the Stooges, including a personal account of Mr. Davis meeting Larry. I have not finished the book yet, but an interesting read for Stooges fans, filled with rare photos. More later...

UPDATE MARCH 25TH, 2009 - New Flash! In related news, the film about the Three Stooges will go into production this fall, with planned release in 2010. Sean Penn is said to play Larry, Jim Carrey to play Curly and Benicio Del Toro is 'being considered' for Moe. The project is currently under MGM. (Personally, it seems finding a group of younger players would be better, but that is my take on this.) More on the blog as news develops. more>
Posted by Edna's Place at 9:23 AM