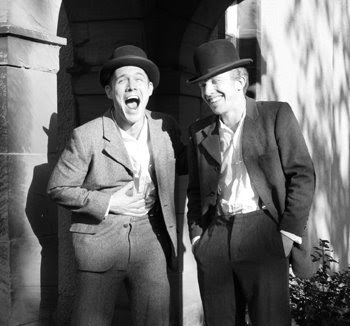 Few people know that back in 1910 two young touring actors- Laurel and Chaplin- toured the music halls of England together before setting sail for the USA and becoming two of the most famous faces in Hollywood history. This unusual true story has inspired writer/ director Kate Bramley (formerly of Hull Truck Theatre) to create the hit show ‘Laurel and Charlie’, that sees the two comedians reunited after nearly 100 years.

The national tour of ‘Laurel and Charlie’ follows two successful outings already for this piece as part of Badapple Theatre’s ‘doorstep theatre’ programme. Writer, Kate Bramley says, “We call it doorstep theatre. This is a chance for local people to come out and enjoy professional theatre right on their doorstep... to come and have a drink and a laugh among friends close to home.

But the shows are just as well suited to theatre audiences across the country and we’re delighted this show is touring for a record 3rd time due to popular demand!” The two comic actors find themselves trapped in a run-down boarding house, penned in by their rent-hungry landlord. With their show cancelled and no money to pay the rent they turn to ever more hilarious means to escape!

The more obliging ‘Laurel’ is played by Colin Moncrieff, a regular actor with the company, who was described as “having an uncanny resemblance to Stan Laurel both in looks and comedic style” (Northern Echo newspaper).

‘Charlie’ is played by Mat Urey, fresh from the Edinburgh Fringe hit ‘The Butler did it’ who makes his company debut with this show.