Blanche Goes to Hollywood and the Taylor Murder

If you know a younger person or know a lover of graphic novels, or like to try one yourself, for your silent film collection there is one available now, with a story centered around the silent era. It is by comic book creator and artist, Rick Geary.

'Blanche Goes to Hollywood' was originally released in 1993, but now is part of a three story series about the adventures of Blanche, as she travels to New York, Hollywood and Paris, back in the early 1900s into the 1920s. 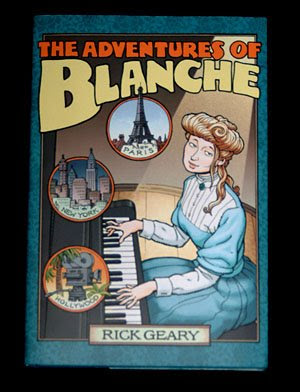 Her Hollywood adventure covers her work in an early silent film studio as a musician. She experiences early day Hollywood, meets stars of the day (including Charlie Chaplin), and sees first hand the labor problems at that time.

While the date for when Chaplin worked at Keystone was off by one year, in general, it gives a good account of that period, all in traditional comic book form. Geary's work has been in numerous publications over the years. And he has an extensive list of comics and graphic novels he has published.

So, if you like something different for your silent book collection, or have someone you like to introduce to silent films, in a fun way, look-up The Adventures of Blanche.

Also, check out Geary's upcoming graphic novel: 'The Mysterious Death of William Desmond Taylor' due out in August 2009 (same time as Rainbow Orchid). As Edna fans know, Edna and her mother Louise, lived by Taylor at the time of the murder, so I am very interested in this graphic novel take on it. Special thanks to Garen Ewing for writing about these book.


UPDATE: June 30th, 2009 - Rick's William Desmond Taylor novel just arrived in my post today! The release date still says August 1, 2009, but I was informed this is an early copy of the hardbound book. And to answer my question above, it does feature Edna in the book. Edna and Mabel are also featured on a panel on the back jacket cover.