Garen Ewing, the comic artist and creator of The Rainbow Orchid - the Adventures of Julius Chancer, graciously agreed to an audio interview with me (Linda Wada, researcher and founder of ednapurviance.org). I wholeheartedly thank Garen for a most enjoyable chat about his long awaited publication of The Rainbow Orchid. 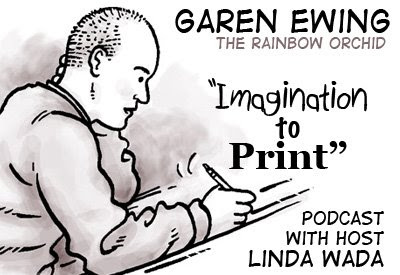 Set in the 1920s, The Rainbow Orchid features adventurous Julius Chancer and silent film star, Lily Lawrence, along with a strong supporting cast of characters including: the devious Evelyn Crow, historical researcher Sir Alfred Catesby-Grey, Lily's publicity agent Nathanial Crumpole, mysterious Urkaz Grope and leading gossip columnist and stirrer of trouble, William Pickle. All of them are involved on an adventure to find the mythical flower last mentioned by the ancient Greek philosopher and botanist, Theophrastus. Julius agrees to help find it to save the estate of Lily's father, Sir Lawrence.

Drawn in the Franco-Belgian school of bande dessinée (a clear line style), the comic has great characters, a complex story and quality artwork. Garen's comic quickly became my favorite and I have been following the development of the story and project ever since.

You never know for sure, but I always had faith it would be picked up by a publisher one day, and that day has finally arrived.

In our interview called Imagination to Print, we start with Garen's childhood background, learning to draw, and the influences that led him to The Rainbow Orchid. We talked about the creation of the comic, development of characters, and the publication history that culminated in publication by Egmont UK.

Garen gives his personal insight on drawing and the world of publishing, (with surprises intermixed). Garen's love of silent films does play a role in the creation of his comic, as you will learn (even Edna Purviance is mentioned).

We hope you will enjoy listening to his story, and maybe gain some valuable insights through his experience in creating his comic and entering the publishing world.

This current file is the audio version of our interview. I am working toward a second version, which will be a visual addition to this audio to be ready later this summer (planning for August 3, night before the book officially releases). Update: I have completed the video version. The 12 minute video has segments from our longer interview talking about Rainbow Orchid with images from his work. You can see at this link. It is as good introduction to our longer program.

The Rainbow Orchid will be released from Egmont UK August 4th, 2009, starting with Volume 1. Volumes 2 and 3 will follow starting in 2010. It is available in the UK now, but can be bought directly from Garen starting August 4th, or via online booksellers and UK bookshops.

So, settle back with a nice cup of tea, and enjoy my conversation with Rainbow Orchid creator Garen Ewing. LINK On the podcast page is a link for information of the order and topics covered.

UPDATE June 18th: For Window users, I've placed up a new page with the audio file on Real Player.

Comments:
"...it was a great interview, nice to have such a long one instead of 20 minutes, allowed for a bit more range." - Joe Gordon, Forbidden Planet International, UK

"I am very impressed at this new way of spreading the word on silent films... Keep up the great work!" - Lon Davis, classic and silent film author, USA

"It was a quality interview, you did a really good job! And it's great that someone who knows so much about the Rainbow Orchid could ask the questions." - Sarah McIntyre, Children book Illustrator, DFC Artist - UK