Special thanks to Dominique for pointing out this charming, well-known photo, on the cover of this book "Hollywood Dogs" by Jean-Claude Suarès. Released in 1993, it is a photo book of Hollywood stars, with their fame canine co-stars and pets. 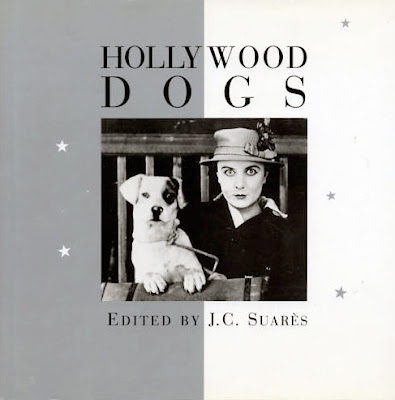 Scraps was Edna's co-star in 'A Dog's Life' in 1918, her first film with First National. He was picked out of many dogs Chaplin brought onto the newly built Chaplin studio grounds in 1918. A delightful film, highly popular in its day and on reviewers list of best Chaplin film.

This hardcover book is out of print, but very reasonable in price, (from newer to used condition). It would make a nice addition to your Edna Purviance collection. (I just ordered my today!) Thanks, Dominique!!! (Update Aug. 20th: Book just shipped! I'll do a follow-up.)

BOOK ARRIVED! - Wonderful edition to any Edna collection! Chuck full of film stars with their 'loved ones' and beautifully produced. Out of print and only available used.
Posted by Edna's Place at 7:43 AM