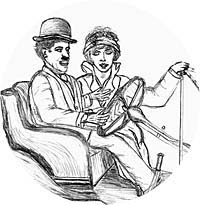 If you are out and about the San Francisco area this summer, you have two silent film festivals to visit.

In San Francisco, July 13th-15th, 2007, The San Francisco Silent Film Festival has their 12th annual event at the Castro Theatre. Some of the highlights include, Retour de Flamme (a selection of French films restored from 1900-1928) and the classic Beggars of Life (presented in a newly restored 35mm print).

For either event, best to get your tickets early. And to learn more about these and the coming Slapsitcom, listen to Stolen Moments this month, as Donna has interviews about each event. Program: "It's Festival Season".
Posted by Edna's Place at 8:52 AM