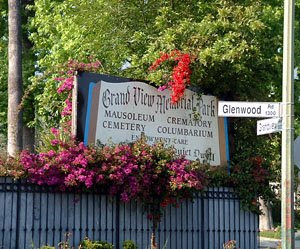 After months of being closed, Grand View gates are planned to be unlocked FOR A DAY on Sunday, March 30, 2008.

"Friends and family members of those buried at Grand View Memorial Park will soon have their first chance in more than seven months to visit their loved ones at the troubled cemetery after a Superior Court judge on Monday approved a tentative public access plan.

The plan, which attorneys involved in a series of legal actions against the cemetery signed off on, envisions up to 40 volunteers staffing the park from noon to 4 p.m. on Sunday, March 30." - Glendale News

See full story at this link to Glendale News. (GN article is available for free 14 days from this date.)

"The one-time opening will be treated as a trial run, but if all goes smoothly later this month, it could lead to regular monthly visitations, said attorney David Baum, who represents cemetery operator Moshe Goldsman... Unlike previous openings, visitors are asked to proceed in their vehicles through the cemetery gates instead of stopping to get information. Once parked, volunteers will direct visitors to informational literature or deliver it themselves, Baum said. " - Glendale News
Posted by Edna's Place at 10:57 AM