Los Angeles local CBS news did run a news report on Grand View this evening, showing the one day opening today at the cemetery in Glendale.

Here is an updated link of reports, including cbs2 and Fox 11 News Los Angeles video reports of the opening.

• Glendale News - Grand View cemetery opens for a few hours
"The goal is to have Grand View open every month for visitation, said Paul Ayers, the attorney who represents the families involved in a pending class-action lawsuit against the cemetery. “Ultimately, we’d like to get it up to at least two times a month,” Ayers said."- Glendale News

• Daily News - Los Angeles - Loved ones get chance to clean graves at Grand View
"Carrying armfuls of fresh flowers to brighten up their loved ones' weathered tombstones, visitors also dragged in rakes, shovels, paper towels and pruning tools to clean up the mess that grew in the nine months since they were last permitted inside."- Sue Doyle, Daily News

Also, I received an email from Lisa Burks this evening, who has been doing detailed reports on Grand View, as well. She reported to me the mausoleum was opened for the first time since 2006. This was not widely known in advance, but a very nice surprise for visitors. Lisa said:

"It looks like there will be more regular visitations in the near future and they plan to have the mausoleum available too. I stopped by Edna and she was still decorated with the red silk rose and photo. I dusted her off and said hello from you and all her fans." - Lisa Burks 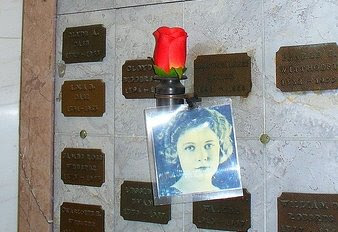 Here is a link to Lisa's photo of 'Edna' and her pictures taken today at Grand View.


Update: April 11, 2008 - Grand View may open again in late May
"Less than two weeks after hundreds of mourners were granted access to Grand View Memorial Park for the first time in 10 months, stakeholders in the troubled cemetery are planning another opening in late May." - Glendale News

Also buried at Grandville is Leo White, who was in a number of films with Charlie Chaplin and Edna Purviance during the Mutual/Essanay period. You might recall him as the gypsy hag in "The Vagabond" or the hapless homeowner whose house is destroyed by fire in "The Fireman".