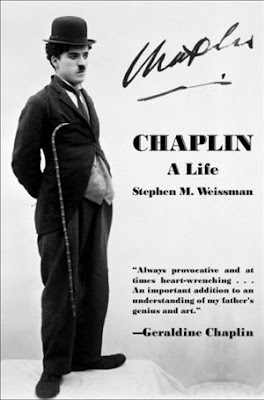 An in-depth psychological study of the formative childhood experiences of the comedian's early years, Chaplin A Life traces the evolution of a former Cockney slum urchin from an invulnerable child into an invincible screen character.

"Best Books for Christmas List" - Independent UK
"A fresh entry in the evergreen field of works devoted to Charlie Chaplin. If ever an artist's life lent itself to psychoanalysis, it's Chaplin's. . . . Weissman lends dimension to the classics . . . and demonstrates Chaplin's ability to transform family heartbreak into film comedies. . . . With lean, energetic prose, Weissman brings this colorful theatrical period to life. . . . He offers vivid sketches . . .and carefully follows the confluence of several artists that lead to the creation of the Chaplin's iconic Little Tramp. Throughout the book,the author caps exhaustive sourcing with an overlay of insightful observations about Chaplin's creative process. Find space on the crowded Chaplin shelf for this perceptive, literate take on the great screen clown."
--Kirkus Reviews

“Weissman uncovers the source for the “shabby gentility” of the Little Tramp, as well as the development of that extraordinary character. En route, he paints an engaging…portrait of how a cinema artist is created and how he practices his craft.” --Publishers Weekly

Just a note: Mr. Weissman's book is about Chaplin's early years and does not include anything about Miss Purviance.

Update December 15, 2008 - It sounds like Mr. Weissman's book will be printed by a German publishing company in about a year.

January 12, 2009 - Public radio interview from D.C. (I don't know for sure how long this interview will be available online.)

January 24, 2009 - We have been informed the book has had the rights sold for publishing in Germany and UK.

February 15, 2009 - Stephen Weissman will have a lecture in San Francisco. DETAILS

August 17, 2009 - Stephen has send out a release telling us his book is going to be publish in Brazil. So the list is growing: UK, Germany, Estonia, Russia and Brazil.

December 2009 - Stephen's book makes the UK Independent 'Best Books Lists' for Christmas.
"Stephen Weissman's Chaplin: A Life" distinguishes itself with a penetrating "psychoanalytic" portrait of the Cockney comedian who conquered early Hollywood. It receives praise from Chaplin's daughter, Geraldine, in the preface."