Remember all the problems Charlie Chaplin had in the states in the late 40s and early 50s? Well, there was a woman today on national television, who is an elected official from the republican's stirring up the same hate that filled the air during those times. It was a sad display, of a growing list.

Misleading information was also displayed this week, as a national conservative radio show, used a flag as something very mysterious, during one of the campaign stops Senator Obama attended in Ohio.

This radio person created a mystery story on air about the flag with an 'O' on it. But he could have known exactly what the flag was, with one quick search on Google.

This 'mystery flag' that he tied some very troubling chat to, with his listeners, is the State Flag of Ohio. 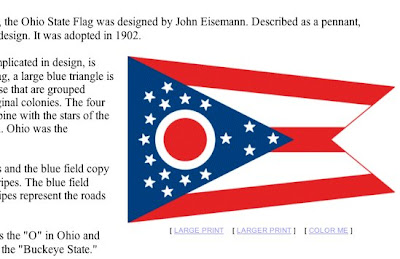 This national radio personality created a story around the flag because it has an 'O' on it, making claims it was something Senator Obama created as a personal flag, which is a total fabrication.

Maybe this national radio broadcaster was just totally ill informed, but it was very easy to find what this flag was, especially with the internet age.

But what is more disturbing, is if this conservative broadcaster knew exactly what this flag was, but used the State Ohio flag to create a misleading story, to feed misinformation to his listeners.

WABC and this broadcaster, should apologize to the State of Ohio for creating a totally misleading and troubling story on their airwaves.

To hear this broadcast this week check it out at this link at Media Matters, a non-profit group monitoring conservative misinformation in the media in the US.

As for the 'mystery flag', here is a link to the State of Ohio to learn more about the State Flag, Bird, Flower, and other items of interest from Ohio.

Charlie would probably see signs of his America of the 1940s and 50s, happening today, including a flash back to the 1930s with failing banks. But that is another story of a great mess we got into...
Posted by Edna's Place at 11:09 PM